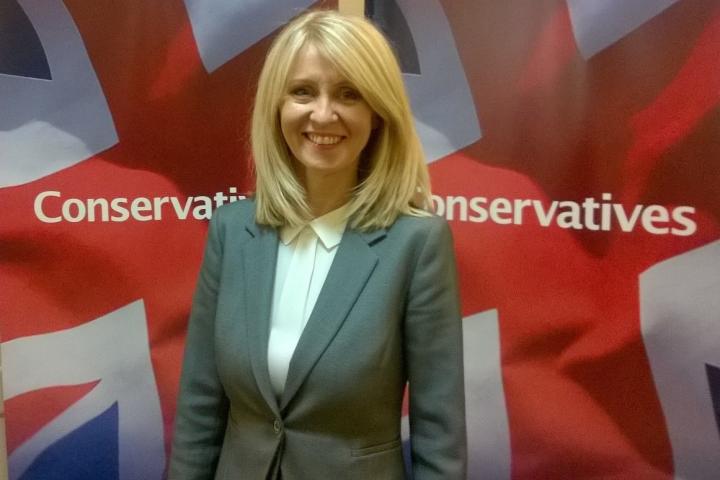 Tatton Conservatives have selected former MP Esther McVey as their candidate for the General Election on June 8th.

Esther was selected on the first ballot by the Tatton Conservative Association at their meeting this evening (Wednesday, 26th April).

Former MP Esther McVey was the member of parliament for Wirral West from 2010 until her defeat in 2015 and was Minister of State for Employment from 2013 to 2015. In February 2014 McVey was appointed a Privy Councillor and before entering politics she was a television presenter and businesswoman.

The other candidates were Katherine Fletcher and Alex Williams.

Knutsford resident Katherine Fletcher is a Strategy Lead at The Northern Powerhouse Partnership and was the Conservative parliamentary candidate for Ellesmere Port and Neston in the 2015 General Election.

Esther McVey will be up against Liberal Democrat candidate Gareth Wilson, who stood against George Osborne in 2015, and Nigel Hennerley who has been selected to stand as Green Party candidate.

The Labour Party have yet to select their candidate to contest the Tatton constituency in June's General Election. At the time of publication we are also unaware of any other candidates who need to submit their application by Wednesday May 11th.

Elaine Napier
Really? Hasn't Tatton suffered enough? An out of towner whose greatest interest is herself. Ditched by Wirral, disastrous as Minister for the Disabled.

Duncan Herald
I attended the selection meeting.
There were three very good candidates.
I'd gone, on the basis of info. avaiable beforehand, to vote for Katherine; but after the speeches and Q & A sessions, I decided that Esther was the best candidate.
She will, if elected by the voters of Tatton, be a very hard working and very available M.P.
Yes, Esther is moving home from the Wirral to Tatton straight away.

I doubt it will be THAT simple for Esther to move from The Wirral to Tatton.....after all, there's a huge housing shortage remember?

Will she be employing the same mortgage advisors that were so helpful to George Osborne? (....you did ask during the Q&A session didn't you?)

since Esther has been active in the constituancy for some time now, she'll know all about local housing.Since she is a very accomplished lady, she'll soon crack-on (that is the correct Liverpool term?).

The Conservatives have been working away at the housing problem but alas after the several years of housing indolence by the Labour mob, it takes time.

Is it true that the Labour Party's noble leader has now pulled out of any leadership debate?
A U-turn?

I wonder if anyone might trouble to canvas the good folk of Alderley Edge as to exactly what kind of local housing there is a perceived shortage of ? I have a taste for facts rather than retoric!

Oh well, not to worry, in a few days we'll have a nice new government; hopefully a pleasing shade of blue?

How are you doing with our parking problem? Are you content with the latest plan, to turn Heyes lane into a green parking lot? Oh? Did I say 'latest'? Isn't this where we were 2 years ago?

I've always wanted to use the word ironic !

Pete Taylor
Duncan, would you happen to know how many votes each candidate received?

What parking problem? On the odd occasion that I drive into the village I have no problem in finding a parking place. If I did, I'd consider using the bus or train or getting on my bike - I certainly wouldn't consider demanding that you let me park in your garden, or that other people should give up their park or allotment or green space so that the interests of businesses triumph over the needs of local people?

I do have some sympathy for the difficulties that businesses face in these straightened times, but to require our patronage AND the giving up of our recreational space to boot is far too big an ask in my opinion

As you well know there are a number of fundamental differences in the proposals put forward by the former PC and the current PC - if you don't (by now) understand those differences, and have the good grace to acknowledge them, you are not the man I thought you were.

Now wouldn't that be ironic?

Duncan Herald
Hi Pete,
if you mean the number at the Candidates meeting, no sorry I don't.
Its kept secret in case either of the two who did not win are entering a Candidates contest elsewhere (so I am told) and there is no wish to 'influence' any such.

Good Morning Alan,
a wonderful summer's day with the sky a wonderful shade of Conservative Blue !

We've been down this path before, thee and me and so I'll try not to repeatedly waffle.
1. If no local business then no local people?
2. Those who might wish to rent out their garden space to a car parker are admirable folk. If its good enough for the Methodist Church ?
3. If by 'giving up recreational space', you have in mind filling the Park with games etc. then I'm with you.
4. We wished to provide a car park with lots of planting; isn't that exactly what the current P.C. wants to do? Or is this a touch of 'its all right if we do it, 'cos we ain't the Tories'?
5. There's even a 'strange' suggestion that the War Memorial should be up-rooted and
re-sited in the proposed Heyes Lane car park; suggested by a Parish Councillor?
Everyone who has mentioned this to me sees it as not so much ironic, more as a disgrace!
There's a reason why the War Memorial is next to the Church; wouldn't you agree?

Roll on the election and let's see how the Mugwump Party does!

The sky is indeed blue though I prefer to think of it as Macclesfield Town blue. But if you want to make political analogies, driving to my office this morning I noted a farmer on his tractor spraying his field with a substance smelling strongly of Tory excrement!

Just joshing with you of course - couldn't resist.

You are correct that we have done the allotment argument to death - I am bored with it now and cant be bothered taking you to task even over some of the more obvious inaccuracies.

I would say though, that whilst I was surprised to see Mike Dudley-Jones suggestion that the War Memorial could be re-located to a quiet space on Heyes Lane, having given it some thought there is no reason why it couldn't happen.

War Memorials don't have to be next to churches and there are many examples of this - a local one being Styal.

I imagine that Mike is thinking that it's more fitting to "quietly contemplate" in a peaceful garden as opposed to beside the busy junction of two major roads and the west coast mainline - frankly I would find it difficult to disagree with that.

Duncan Herald
Hi Alan,
1. excrement on the field makes the soil stronger and more fertile; just what we Tories do ?
2. quietly contemplate? In a car park? Whilst coughing ? You're being amusing ?

Joking aside for a moment; the memorial remembers people who died for their country and many of them were church-going people.
I believe the words 'Rest In Peace' are still used.
The previous Parish Council had the same queston brought up; we gave it very short shrift indeed.
If a Parish Councillor is suggesting such a project, does that mean that the Parish Council is contemplating it? I would truly like to know about that.

It is a memorial not a grave. Nobody is resting in peace there.

I'm interested to know who and why it was suggested to the previous Parish Council that it should be relocated?

1. A lot of water has passed under many bridges; or to put that another way, I just can't recall who proposed the (dumb imho) idea of moving the war memorial. I can't even recall whether it was a member of the public or not.

2. I'm still against the suggestion of moving a war memorial from next to the Church to a car park. What's your view on that?

3. I did ask, in as gently a way as possible, whether this was an idea put forward by one individual (who just happens to be a Parish Councillor) or whether it was a proposal being considered by the Parish Council. Alas no answer. What do you think ?