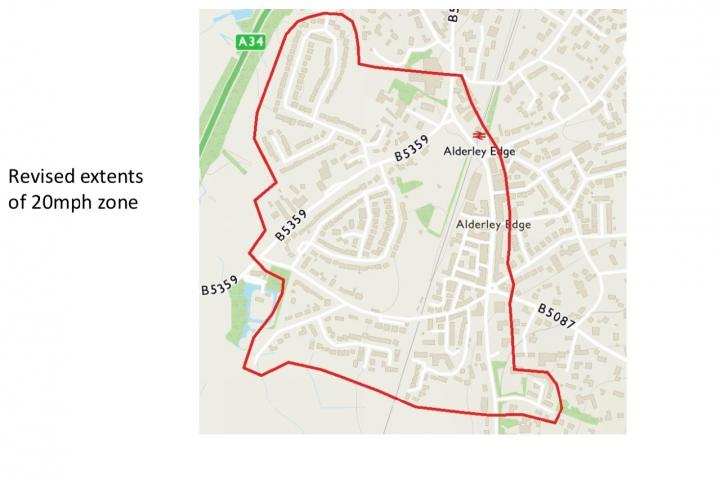 A recent survey has shown high levels of support among residents for the introduction of a 20mph zone and traffic calming infrastructure in the village centre.

Residents were asked to indicate their support, or otherwise for, the introduction of a 20mph zone in the village centre; the installation of raised tables at existing pedestrian crossing points; the creation of a mini roundabout at the junction with Brook Lane and additional traffic and traffic calming measures throughout the proposed 20mph zone.

Over 200 responses were received to the survey, which was promoted on alderleyedge.com, over the course of one week.

85% of respondents agreed that the introduction of a 20mph zone is an appropriate response to the problem of anti-social driving in Alderley Edge.

Whilst the introduction of a mini-roundabout at the junction of Brook Lane was the most popular measure, even amongst those who do not recognise anti-social driving as a problem in Alderley Edge, with 86% in favour.

85% also supported the introduction of raised tables at the pedestrian crossing points on Wilmslow Road, London Road and Ryleys Lane, as a further traffic calming measure,

Councillor Craig Browne said "The survey results suggest that the limits of the 20mph zone may need to be reviewed and amended (or extended) before a final design is produced and consulted on in the New Year."

He added "Of those respondents not in agreement with the scheme, many were resident in outlying areas (e.g. Wilmslow) who wanted the proposals to be extended to their own neighbourhoods."

1. Do you agree that the proposed introduction of a 20mph zone is an appropriate response to the problem of anti-social driving in Alderley Edge?

2. In addition to the introduction of a 20mph zone, it is proposed to install a mini roundabout at the junction of Brook Lane and Wilmslow Road. Do you agree with this?

3. As a further traffic calming measure, raised tables would be introduced at the pedestrian crossing points on Wilmslow Road, London Road and Ryleys Lane. Do you agree with this?

4. As a further traffic calming measure, physical infrastructure would be introduced in parts of the 20mph zone. do you agree with this?

5. Thinking about the extent of the proposed 20mph zone, do you feel that the selected area is correct?

Speaking about the next stage, Councillor Craig Browne said "These have been fed back to officers from Cheshire East Highways, who will draw up a final scheme for formal consultation early in the New Year."

Vince Chadwick
Traffic humps, eh? Well, the extensive local 4 X 4 brigade will simply never notice those, while the rest of us will creep over them in the hope of reducing to a minimum our visits to Kwik Fit to have broken springs and tyres with split shoulders replaced.

There are more imaginative and effective ways to implement traffic calming.

David Carey
Some of the comments and suggestions are correct, in that there are obvious problems with Ryleys Lane, Heyes Lane and after walking along Mottram Road during lockdown the cars travel at horrendous speeds towards the village centre.

Kelvin Briggs
I would add Wilmslow Road to the list. Despite increased Police presence this 30 mph area is abused on an hourly basis.

David Smith
One solution Duncan is to have several camouflaged speed cameras to detect those who think a 20mph limit doesn’t apply to them or they are not capable at controlling their vehicle to maintain this required legal speed limit or they are happy to pay the £100 fine that comes with contravening the social limit that is well advertised via signs and thereby provides the violators with NO excuse. For those willing to pay £100 every time then it is only measures like adding 5 points to their driving licence that will eventually encourage them to ‘tow the line’ before they are banned form driving. Of course ‘hidden’ cameras are not allowed and have to be fully visible so that speeding motorists have time to slow down before the camera and then speed up afterwards. Always was a misguided philosophy if you ask me.
The £100 penalty here and other locations would help finance such works - if the fines raised in this way could be allowed into local coffers instead of going to the government in Westminster.

The comments about Wilmslow are valid. We are fed up with the A34 bypass being used as a track where sporty racers can disturb our peace and rattle their exhausts for as loud and as long as they wish.
How about Craig Browne [Alderley Edge] - as deputy leader of the council - doing something for us and not just attending to the problem in his own backyard?
A 40mph bypass speed limit with radar traps and the odd speed camera would be a start.

Thanks for your comments and question. As I explained on a previous thread (https://www.alderleyedge.com/news/article/20903/5-point-plan-to-tackle-anti-social-supercars) the funding (Section 106) for this particular project has been raised on previous developments within Alderley Edge and may only be spent within the village boundary.

I appreciate that the issue we are seeking to address in Alderley Edge may also be a problem in other areas; however, use of Section 106 funds is governed by legal agreements which restrict the ways and locations within which the money may be spent. Residents from outside the village should therefore take this up with their own Ward Councillor(s).

David Smith
Except, Craig, that YOU are the Deputy Leader of Cheshire East Council and as such should be steering policies that affect ALL areas that you are Deputy Leader for. You might be a councillor for Alderley Edge but have a higher responsibility when it comes to addressing the concerns of the residents of ALL Cheshire East. I would expect you to raise borough-wide issues like this with the leader of Cheshire East and think up solutions to a problem that is affecting ALL areas of the borough for which you and the leader of the council must address. You then perhaps might like to liaise and discuss the issue with other councillors and perhaps set up a committee to QUICKLY come up with a solution to please the residents that have voted you into office and as such expect some action. [Quickly doesn’t mean having lots of time consuming surveys and studies to get a few opinions and facts].
So publicly doing something for a problem that affects your own ward and then doing nothing for another ward with the same concerns doesn’t put you in a good light as far as I can see.
Or am I missing something when it comes to local government and the political game of passing the buck?

David Smith
Malcolm Elliott:
I've looked at your link, which takes me to speed cushions.
I've come across these in various locations and have never slowed down from the legal limit in order to pass over them. All you need to do is drive over with wheels either side of the 'cushion' and from my experience never feel any jolt or bump in so doing.
So another waste of money on a 'traffic calming measure' that doesn’t live up to its name!
Incidentally can some councillor, who might be reading my comment, inform us what they cost to install so we can all know how much of our council tax is being wasted?

David Smith
I sent the following email to Craig Browne and have had no repy whatsoever as of 28Dec20:

I am contacting you as the Deputy Leader of Cheshire East Council and also as a local councillor who has attempted to address the issue of noise form ‘boy racers’ in their sporty vehicles down the main street in Alderley Edge. Most of these ‘motorists’ are the owners of expensive cars and not some impecunious lout who has bought an old banger for a few quid and drilled a hole in the exhaust just to make it louder.

It is 1400hrs on Sunday the 20th December 2020. I live in XXXX YYYY, Wilmslow which doesn’t back onto the bypass as do other residential areas of Wilmslow but from a modest distance I can hear quite loudly the racket from these ‘boy racers’ who are taking pleasure out of using the bypass as a track along which to drive their vehicles in such a manner as to have fun and produce as much noise as possible. This is the purpose of being on the bypass. They aren’t particularly going anywhere and are out just for the ‘fun’ of it all.

This is an issue that has been going on for as long as the similar problem that you are addressing in the area that you represent and has been voiced in the local WILMSLOW.CO.UK media for some time now and which I notice you have been brave enough to visit and read about the problems we are having here.

I would like to ask you – in the position as Deputy Leader of my local council - what is being done to silence these motoring hooligans to make them go somewhere else and have their ‘fun’?

I request a reply directly from yourself and not a passing of my email to the councillors who could be deemed responsible for this area of town since you have already delved into the issue for your own area and so should be au fait with what can be done and IS being done.

I should think most of these vehicles have modified exhausts that would fail an MoT test and so should be checked on that basis for any contravention off the regulations. Otherwise it is a bit tricky to get them off the road on the basis of being a pain in the arse and the social nuisance that they really are.

It’s not too late or dark for you to nip out and stand on one of the bypass bridges to sample what I am describing.

I look forward to your reply.

Thank you for your comment. I would like to reassure you that your letter has been received and logged as Deputy Leader correspondence, in line with your request.

You will receive a formal response in due course; however, I am taking leave over the Christmas period until Tuesday 5th January and so you should not expect to hear back until after that date.