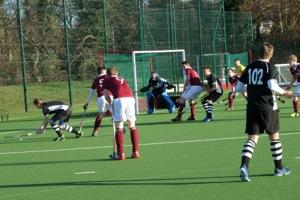 The game lacked intensity from the start and both teams appeared to be below their best. Alderley started to get on top through the wing play of the Gregory brothers and Coxon forced a good save from the Rhydding keeper. However, a lack of concentration at the back that left a Rhydding forward unmarked and he was found by a long pass giving him the simple task of passing to a teammate who deflected the ball into the side netting.

Alderley found an equaliser when Frankie Bryant worked his way to the bye line and pulled the ball back for Simon Parr to finish with aplomb, despite a valiant effort from the 'keeper.

Another long pass down the centre of the pitch undid the Alderley defence and found the onrushing forward who hit a reverse stick shot which ballooned into the air and fell into the net.

Alderley still had time to grab an equaliser before half time as good individual play by Ben Gregory lead to him being through on the keeper who he rounded to score from an acute angle. Jackson also forced the keeper to make saves from penalty corners.

The second half was a very similar affair with neither team hitting top form and dominating. Alderley were looking the more dangerous and pressing higher and being more clinical, it was Scott Mattingly's diving finish from a corner that gave Edge the lead.

It was Rhydding's turn to attack and Riley pulled off a fine diving save from a reverse stick shot hit on the run and was again heavily involved in keeping out Rhydding's only penalty corner and the rebounds. Both teams looked susceptible to the aerial ball as the game switched from end to end.

Rhydding's equaliser came when following a free hit they were allowed to fire the ball into D and the unfortunate Cook got to the ball first but could only deflect it into his own net. Rhydding looked happy with the draw and sat deep, but Alderley were caught with a sucker punch as the aeriel ball evaded Kay and was taken by the forward. He was allowed to play on, despite other Alderley defenders, and able to pick out an unmarked teammate at the back post for an easy finish and steal all three points.

Alderley travel to Gateshead next week in the last match before the break in what is developing into a must win game.

The 2s have put a string of good results together and have climbed to third in North division two, this week they turned around a two nil deficit with goals from Oli Wildig and corner conversions from Kieren Hall and the winner from Laurence Barnes, to take all the points home from Lytham St Annes.

The 3s took on third placed local rivals Macclesfield. Edge continued their amazing run of results with goals from Andy Bryant from the penalty spot, 4 from Andy Walker, a brace from Ed Johnson and others from Oli Kennon and Louis Godfrey - which gave them a 9-1 win.

The 4s had great 7-2 win away at Chester with manager Richard Williams strapping the pads on to keep goal for the first time. The 6s also won well 6-3 away at Crewe. And an extremely yiuthful 7ths went down to Triton 3s.