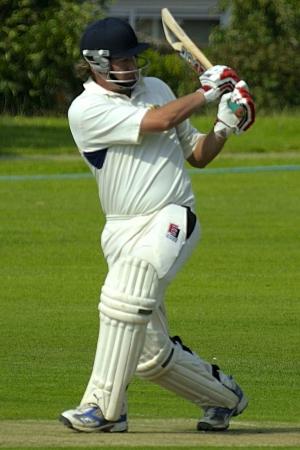 Alderley Edge 1st XI recorded their first victory of the season on Saturday in a thrilling finish against powerful Hyde.

Hyde's ground is one of the highest situated in the country and normally extremely picturesque – but sadly on Saturday it lay engulfed in low cloud, leading to play being delayed by over three hours because of drizzle and poor visibility.

When the match finally started, it was reduced to 30 overs per side. Hyde's innings was generally kept in check well by Alderley's three seam bowlers Ben Davis (with best figures of 4-62), Jason Whittaker and Tom Foreman. One point was reduced to 56-5, but a good stand between Cheshire captain James Duffy (*56 not out, including three successive sixes in the last over) and John Ashley (41) allowed the home side to reach 152-7.

Despite losing an early wicket, Alderley set off very purposefully in reply, with captain Alan Day scoring 45 at better than a run a ball until he was dismissed by Hyde's excellent left arm spinner Daniel Cranmer. A useful 30 from Adam Worrall kept the run chase on target, and in the end a well paced partnership between Jon Steele and Whittaker saw Alderley home with 5 balls to spare, gaining them a vital 25 points – a great confidence booster with triple champions Nantwich next on the horizon.

To complete an excellent day for the club, the 2nd XI also scored a convincing victory over Hyde, and moved into 2nd place in the table. Hyde slumped from 90-1 to 130 all out, Will Hardwick being the outstanding bowler with 6-53. Alderley then coasted home to record a 6 wicket victory.