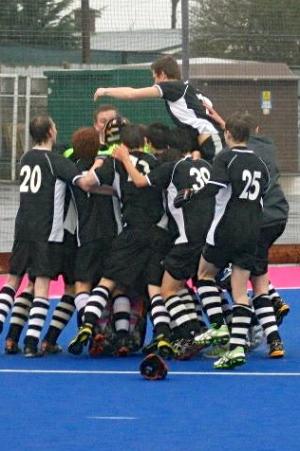 Alderley Edge Hockey Club has had two more triumphs with their junior section.

The Boys U18 reached the National Knockout finals, played in Essex.

First they came up against Marlow, the favourites and whilst not at their best gave a reasonable account of themselves but went down 4-0. Marlow went on to win the title.

However, in the bronze play-off there was high drama. After falling two nil behind, Alderley Edge mounted a comeback making it 2-1 and then Andrew Jackson rifled a penalty corner into the top corner to level the scores.

The game was decided by penalty strokes and Jackson, Hughes, Laughton, Bryant and Scott made no mistake, taking it into sudden death. After nine rounds James Bateman pulled off the save that meant that Alderley Edge picked up the bronze medal. With most of the squad eligible to play next year they will be hoping to go for gold in 2014.

The Girls U14 squad hope to out do the boys after they reached the National finals winning their North qualifying group with a 100% record, they beat Springfields, Wakefield and Belper all by a 4-0 scoreline. A fantastic achievement and they will travel to Beeston in May to find out if they are the best in England.