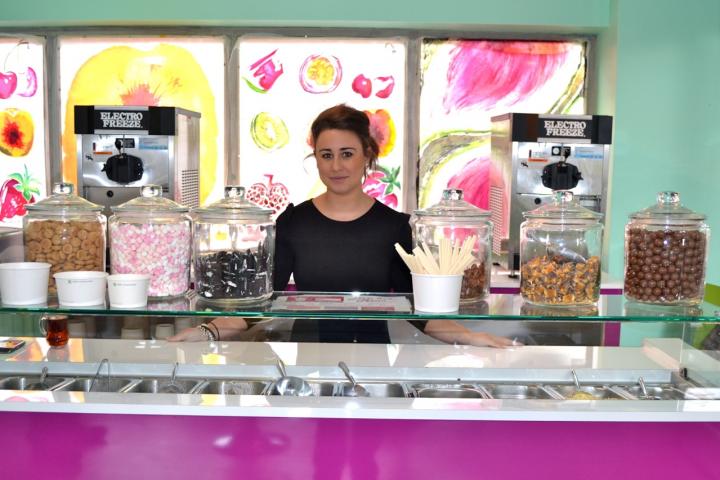 A new frozen yoghurt and ice-cream bar has opened at Highams garage on Alderley Road, ahead of the imminent launch of their American style deli.

Ilana Higham, pictured above, is managing Deli Ice whilst her younger sister Nadia has created all the artwork including an Alderley Edge collage featuring some old and very interesting local memorabilia.

Deli Ice is the first stage of the redevelopment, located in the building previously used for offices and alongside the round car showroom which will reopen in about two weeks as Aldeli, serving hot and cold sandwiches as well as fresh and healthy salads.

Stephen Higham explained "The round showroom was originally built by Total Oil Co. as a showcase petrol filling station and lubrication bay in 1961. Only a few years later electronic self service pumps were introduced with wide lanes, making the site no longer suitable for petrol sales.

"Although we have used the building as a car showroom it was far from ideal and for many years we have looked for a suitable use for the very iconic building.

"There are lots of eateries in the area but few to offer wholesome food at an affordable price. We are trying to create a friendly 'coffee shop' environment for people to eat and drink casually. We have constructed a large terrace which has got outside heaters and permanent shelter from our inclement weather and we will be offering the use of shisha pipes. We look forward to seeing you soon."

Deli Ice is open daily from 8am until 7pm.

Kaz Baildon
I thought I had also read that there would be a car valeting service too - have I got this right?

Kate Branagan
Glad that they are making good use of the building and that it is something a little bit different. However, shisha pipes ???? Medically this is just as bad for you as smoking cigarettes - not an idea that will entice me to go unfortunately.

Stephen Higham
Don't worry, the Carspa car wash and valet service will still be running. Thanks for you comments and we look forward to seeing you.

Julie Richards
Am so dissapointed Mr Higham I was soooooo looking forward to something different for the village.

Yeah I thought an American Diner in that fab building would be great..... but to offer Shisha pipes? I hope you are joking!

Smoking through water still has risks of cancer and gum disease.

Mixing an American theme with something that originates from the Middle East! Have you thought this through?

Kaz Baildon
When I looked up what they were, I had to check the date because I thought it must be an April Fool's joke?

Alan R Davies
Good luck with this venture, except for the shisha pipes. I don't have any objection in principle, but next door to the petrol station doesn't sound like the best place, especially when they have a tanker delivery.

David Dorgan
I am not sure that the outdoor heaters are a good thing given how bad they are for the environment (and we must look after the environment we are constantly being told) Have people forgotten how to wrap up warm? As for the Shisha pipes it's not the Edgeware Road you know.