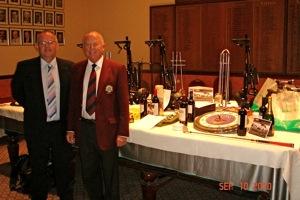 The 2010 Captain's Charity Golf Day took place on Friday, 10th September, and raised £2,525 for Crossroads Care, which is Britain's leading provider of support for carers and the people they care for.

The Charity Golf Day has been running each year since 1996 and is supported by Alderley Edge Golf Club members, local businesses and players from other clubs in the area.

The man behind the event is Brian Foden who told us "I have run a golf charity do for the last 14 years at Alderley Edge Golf Club. It started when my mother was diagnosed with cancer using the MAST scanner at Macclesfield Hospital and we raised over £2000, so the following year I did it for the British Heart Foundation and its always been a different charity each year.

"So far we have raised over £60,000 during the last 14 years, all for mostly local charities like East Cheshire Hospice, Williams Syndrome Foundation, Macmillan nurses and many more. I am now decided after seeing the concert on Sunday that next year on the first Friday of June my next venture will be in aid of Help the Heroes. I was amazed by the bravery of these amazing people, so I will be looking for sponsorship and prizes etc to support the event."

An auction was also held and Mike Marshall, the auctioneer, persuaded members and guests to dip into their pockets for a variety of gifts donated by local businesses, club members and others.