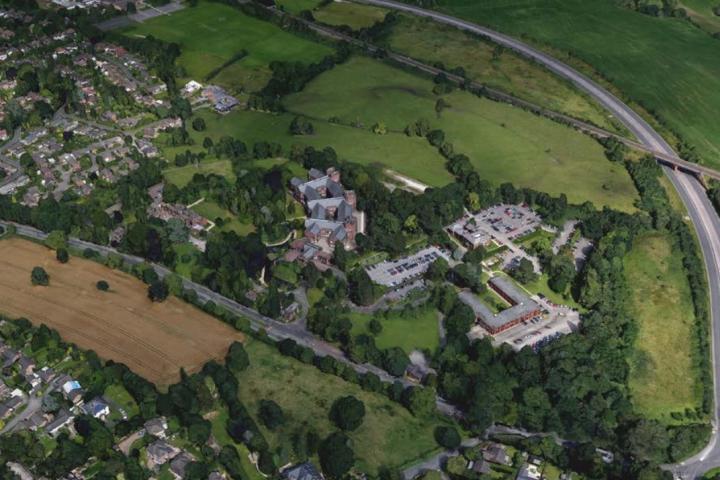 Outline planning permission has been granted for a new resident development on land east of Alderley Road for the second time.

The Strategic Planning Board approved Royal London's plans for 120 dwelling on the former green belt site which was allocated for development in the Local Plan. The site is located to the north and east of the former Royal London Campus, between Alderley Road and the West Coast Main Line.

Outline planning permission for a residential development of a up to 120 dwellings (reference 17/5838M) was previously approved by the Council in December 2018 and is still live.

However, Planning Officer Nick Hulland explained to committee members "This application is effectively an insurance policy for the land owner should the reserved matters not gain approval or be progressed for any particular reason because in that instance the current live outline permission would expire."

Councillor David Jefferay, ward councillor for Wilmslow East, spoke at the Strategic Planning Board meeting on Wednesday, 12th October. He said "There are a few aspects that worry me and I am concerned that it may be seen as just a rubber-stamping exercise because it is a resubmission of an earlier approved outline application."

He went on to raise concerns about flooding - relating to Harefield Farm - and the impact on the heritage assets.

Councillor Jefferay added "As you will all appreciate this is a large site, and I would therefore urge you to question why it is not possible to meet the requirements for biodiversity net gain on-site instead of in Adlington where it provides zero benefit to the badgers, common toad, polecats, hedgehogs, brown hare and potentially otters in the immediate area or to the wider Wilmslow residents."

Councillor Jon Newell spoke in opposition of the application on behalf of Wilmslow Town Council who recommend refusal of the proposed access from Alderley Road, favouring access to the site being controlled at the existing traffic light junction, thereby avoiding the need for several junctions.

Local resident Ian Shepherd also spoke at the meeting, representing the nine families who live at Harefield Farm, which lies immediately to the north of the site, who are so concerned about the risk of flooding to their homes that they commissioned an independent evaluation of the plans.

He said "I would like to just emphasise two findings. Number one, The Royal London Masterplan does not indicate where displaced service water can be stored within the planning layout as it should, in fact the existing plan is to drain the elevated platform north towards our home, so creating a bigger problem.

"And number two, the proposal to raise the ground level will create a damming effect along the southern side of the water course preventing the existing natural overflow of flood water. This will increase the flood risk off site to Harefield Farm."

Her added "We will hold you accountable if our homes are damaged as a result of this application."

Mr Philip Grant, the agent for the applicant, told the committee "The site is located within flood zone one which is the lowest risk designation. We acknowledge that concerns have been raised by the local community about potential off-site flooding.

"I understand that the applicant undertook some hydraulic modelling work on a voluntary basis in response to concerns raised, which I understand wasn't strictly necessary for this application and all I can really say is the Council's flood risk officers have raised no objection in principle, subject to planning conditions which will require the development to be executed and proceed in accordance with the flood risk assessments and for a detailed surface water run off strategy to be submitted and agreed.

"The Environment Agency raised no specific concerns so all around we are confident that the development can proceed and there will be no unacceptable impact in that regard."

The plans were approved unanimously, subject to three additional conditions including a S106 agreement to secure £20,000 towards the review and implementation of a 20mph speed limit, exploring biodiversity closer to the site in Wilmslow and an access to the commercial site which is for buses, pedestrians and cyclists only.

Though it was pointed out to members Royal London already have outline approval so if Story Homes reserved matters application goes through then the planning application which they have sent considerable time talking about and debating "is pointless and might not even go anywhere".

Matters in relation to layout, scale and appearance are reserved for subsequent approval.

Jon Williams
Sorry, but we do not need another 200 cars on this green belt site so near to the town centre,

Andy Brown
They best sort the drainage problems out first.

Stephen Maynard
Well living on a swamp I suppose must to some have some benefits - what builder can guarantee a house there with zero subsidence - imagine trying to get insurance on a known flood plain!! You would be mad to buy a property anywhere round there having see the water that still doesn’t drain away even after months of excavating and pipe laying