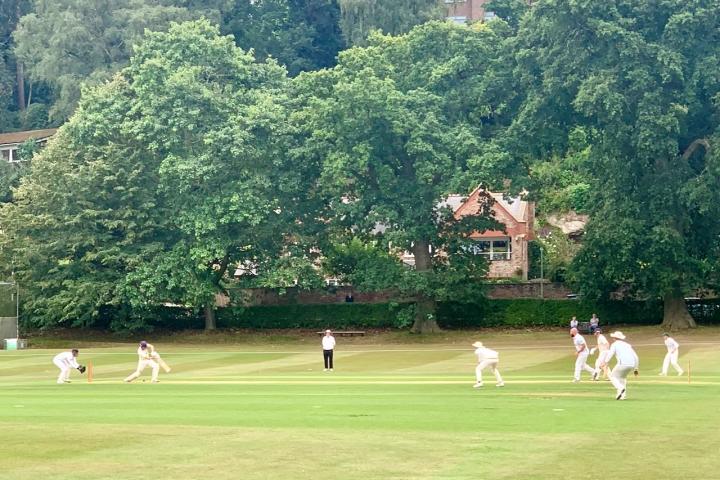 A dramatic day in the Cheshire County Premier League on Saturday saw Alderley complete a 5-wicket win over Oulton Park at Moss Lane, a result which puts them in second place in the table with two matches of their season remaining.

Winning the toss and bowling first Alderley's attack were met with a chalk and cheese approach from Oulton Park's opening pair with Danny Leech's watchfulness contrasting with the belligerent style of Martyn East. It was East's 25 from 27 balls that dominated the opening exchanges setting a fast scoring pace as the visitors reached 31-0 off the first 6 overs before Andrew Windle claimed the opener caught behind, soon followed by number 3 Jimmy O'Sullivan for 6 to give the seamer 2-24 off 11 overs.

Leech continued to battle to 23 from 73 balls putting on 38 for the third wicket with Cheshire red-ball captain Rob Sehmi before being run out thanks to sharp work on the square by Sam Perry. From there Sehmi continued to play a lone hand as a direct hit run-out from Archie Vaughan and a spell of 4-28 from Ed Foster tore through Oulton Park's middle order as they slipped from 110-3 to 129-7. Sehmi eventually fell for a patient 47 after losing his off stump to a Richard Wilkinson delivery with a 51-ball stand from number 10 Jonny Litler, yielding 18 not out, holding up the hosts before they eventually claimed the final wicket with an over remaining to see Oulton Park bowled out for 171.

Oulton Park's Cheshire spinner Andrew Dufty claimed the first wicket of the second innings with 23 runs on the board as Ed Foster was trapped lbw for 14. Seamer Jonny Litler followed up his performance with the bat to take two big wickets in Archie Vaughan and George Bell to leave Alderley in a tricky spot at 58-3 before a composed 32 from number 5 Richard Wilkinson, in the company of Alderley mainstay Sam Perry took the hosts into 3 figures.

Perry, who went to his half century with a glorious straight six, was eventually dismissed by Litler (3-55) for 78 with 14 required, the remaining runs quickly rubbed out by Tom Foreman's 17 not out to take Alderley home. Alderley's victory paired with defeat for long time front-runners Hyde has set up an intriguing next fixture on Saturday at Didsbury who now sit top of the league having played one more game than Charlie Reid's side in what could amount to a title decider.

In Second XI action Alderley took a crucial 11 points from a three-wicket defeat away at Oxton as Jon Usher's side continue to try and beat the drop, currently sitting ten points above the relegation spots. Having been asked to bat first after losing the toss Alderley opener Andrew Kennedy's 51 held things together early on in the match as quick wickets from Richard Fennah (2-31) left Alderley at 24-3.

Dil Yahathugoda's 85 not out from number 5 coupled with 37 from wicketkeeper Christian Smith helped Alderley post 215-5 to take 8 batting points. In the Second innings a 58-run opening stand set Oxton well on their way before spinner Liam Yahathugoda claimed 2 wickets from his 15 over spell to leave the hosts on 101-2 and three wickets for Charlie Boddy slowed their chase to 158-5. But a composed 70 not out from Oxton number 3 Toby Brown with a handy 28 from number 7 Callum Andrews saw the hosts to their target for the loss of 7 wickets.

On Sunday, Alderley's Third XI claimed victory over second-placed Sale at Moss Lane in their bid for survival in the Third XI Premier League with only 26 points separating 3rd and 9th in the ten team division. Winning the toss and bowling first Sale quickly had the hosts on the ropes at 60-7 until a backs-to-the-wall 52 not out from number 8 David Johnson and 19 from number 11 Katie Haszeldine scraped Alderley to a total of 193.

In the second innings Sale opener Jamie Coombes' 78 provided the lion's share of the required runs but an inspired performance from youngster Liam Yahathugoda with 5 wickets, 1 catch and a run out swung things back in Alderley's favour for them to close out the Sale innings with the visitors 34 short of their target despite a battling 36 from Theo Broadbeck in the middle order.