Cricket: Runs flow for Perry in League win and T20 defeat for Alderley 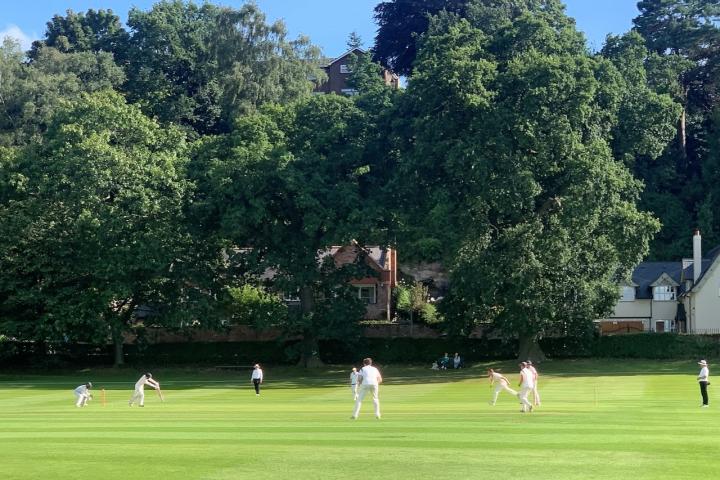 Two more centuries for Alderley Edge 1st XI's Cheshire batsman Sam Perry were the highlights of a weekend that saw the team defeat top-of-the-table Hyde in the Cheshire Premier League but slip to defeat in the last 16 stage in the National Twenty20 competition.

On Saturday at Moss Lane Alderley won the toss and elected to bowl first against the league leaders and soon had them in trouble at 15-2 with Jimmy Naylor striking early to remove both openers in picking up 2-28. Replacing Naylor at the village end Richard Wilkinson compounded Hyde's misery with an inspired spell of 4-63 from 16 overs, including dangerman Andrew Jackson to leave Hyde on 52-6.

Keshana Fonseka managed to hold back the tide and with Hyde skipper Daniel Cranmer hitting 25 from number 8, the pair began to steady the ship with a partnership of 46. As the pitch flattened out and the sun began to strengthen Hyde's lower order began to prosper in the more batting-friendly conditions with Ben Balderson adding 19 and Jason Ebrrell striking 33 from just 27 balls from number 10 in partnership with Fonseka who finished unbeaten on 79 as Hyde made a good recovery to post 207 all out from 51.4 overs, Will Valentine taking the final two Hyde wickets.

In reply Hyde's attack reduced Alderley to 21-2 with Andrew Jackson accounting for opener Ed Foster and number 3 Tom Foreman before George Bell and Sam Perry added 65 for the third wicket, Bell departing for 29 after having his stumps rearranged by Luke Young. In the meantime Perry continued to churn out runs, comfortably compiling a fantastic 123 from 138 balls to blunt the Hyde attack and take Alderley almost over the line, the opener finally dismissed with the scores level. It was left to Richard Wilkinson, who played the perfect foil with 34 not out to hit the winning runs to give the hosts victory by 6 wickets and close the gap at the top of the table where Alderley now sit in second place, 15 points behind their opponents.

On Sunday Alderley travelled to Smethwick CC in Birmingham as they represented Cheshire in the North West Regional T20 finals day. Alderley's opponents were the same as at this stage last year, the North Wales T20 Champions Menai Bridge. The men from Anglesey won the toss and elected to bat first in the second semi-final of the day on a warm and sunny afternoon but a good all round bowling display from Alderley restricted the Welsh side to 129-8.

Richard Wilkinson was the stand out with 3-11 from his 4 overs, middle order batsman Robbie Jones doing the bulk of the scoring for Menai hitting 56 not out including 4 sixes off the final over of the innings. In reply, 29 from Tom Foreman and 34 not out from Wilkinson was enough to see Alderley to the win by 6 wickets as the Moss Lane men reached their target with 14 balls to spare.

In the North West regional final match (the National round of 16 stage) Alderley faced local side Barnt Green who had beaten Staffordshire side Longton in the first game of the day. Winning the toss Barnt Green elected to bat first and got off to a destructive start with Rheedyi Amin (78 from 46 balls) and Jacques Banton (29 from 24) adding 70 for the first wicket in quick time.

An economical spell from Richard Wilkinson along with wickets for Charlie Reid, Dan Fesmer, Will Valentine and James Naylor helped pull things back for Alderley as Barnt Green closed on 194-4 from their 20 overs when they were looking on course for a score well in excess of 200. In response a stand-out knock of 108 not out from 63 balls (10 4's, 3 6's) from Sam Perry kept Alderley in the hunt but a well regimented bowling and fielding display from the Birmingham League outfit was enough to see Alderley fall 23 runs short closing on 171-4 from their 20 overs to end Alderley's run in the competition.

On Saturday, Alderley's Second XI drew with Hyde at Werneth Low in a crucial match at the bottom of the table. After winning the toss Alderley elected to bowl first restricting the hosts to 71-4 in the early stages. A quickfire 110 from 97 balls from number 4 Liam Grindlay got Hyde back into the fight and 45 from wicketkeeper John Ashley helped lift the hosts up to 204-6 before some late order hitting left Hyde to close on 255-9, George Valentine taking 4-45 and Dan Fesmer 3-78 for Alderley.

Openers Ashray Bhamidipati (38), and Liam Yahathugoda (25) got Alderley off to a strong start with a 61-run opening partnership but 4 wickets in quick succession for Hyde, two apiece for Steve White and Rohit Acharya, stopped Alderley's reply in its tracks. A knock of 29 from number 5 Dil Yahathugoda helped to halt the rot but Hyde's bowlers continued to squeeze the scoring rate leaving Andrew Kennedy, with 41 not out, and Dan Fesmer with 19 to bat out for the draw closing on 173-5 from their 50 overs. The 8 points Alderley claimed to Hyde's 13 helped the Moss Lane men stay 2 points above Hyde in the fight to avoid relegation with the bottom four sides now only separated by 13 points.

On Sunday, Alderley's Third XI lost to Timperley at Stockport Road after being asked to bat first and only mustering 132 before being bowled out, Dil Yahatughoda's 35 and 24 from Ashray Bhamdipati the only significant contributions as Muhammad Usman, Muhammad Haris and Shahnawaz Khan each bagged 3 wickets for the home side. Alderley battled hard in the second innings, taking seven wickets before Timperely reached their target, Bhamdipati with 3-34 and Ben Chapman claiming 2-39 in leading Alderley's attack. Alderley picked up 7 points from the tie as they also look to avoid relegation from the Sunday Third XI Premier League.