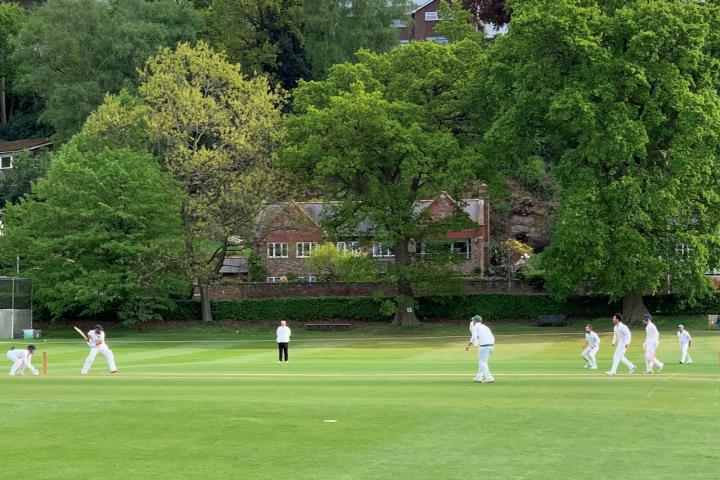 Alderley Edge First XI notched their first win of the season from their third game in the Cheshire County Premier League at Moss Lane on Saturday overcoming neighbours Toft.

Winning the toss and bowling first Alderley controlled proceedings in the first innings from the off on a helpful surface for the bowlers. Opening pair James Naylor (2-22) and Andrew Windle (1-10) restricted scoring opportunities and struck key blows in the visitors' top order to leave them at 29-3 including Naylor claiming the key wicket of Lancashire man Rob Jones for just 6.

With Toft on the back foot, Alderley skipper Charlie Reid took full advantage with a great spell of 6-34 from 17 overs of off-spin ripping the heart out of the visitors' order while still squeezing the scoring rate - Toft taking until the 32nd over to register their 50th run by which time they had already lost their first 5 wickets.

At 64-9 Toft's final pair rallied to add the highest partnership of the innings with number 10 Adam Kenyon top scoring with 22 not out in accumulating 35 in the company of James Hodgson before Naylor closed out the innings with the score on 99.

Alderley's reply began in chaotic fashion with the hosts reduced to 19-4 as Toft openers Adam Kenyon (3-18) and Tom Forster (1-20) took advantage of continued seam movement at the beginning of the second innings.

As with the previous week George Bell and Ollie Kenyon proved steady hands on the tiller halting the visitors momentum and counter attacking with a partnership of 62 for the 5th wicket. The spin of Rob Jones accounted for Bell for 47 before bowling Kenyon for 21 but Charlie Reid ensured there were no further dramas for the home side hitting 14 from 19 balls including a six to complete the chase with four wickets in hand.

Alderley's Second XI had another afternoon to forget in the reverse fixture at Booths Hall with an experienced Toft side running out winners by 9 wickets against Jon Usher's side hamstrung by player unavailability. Winning the toss and bowling first the hosts knocked Alderley's under strength side over for just 36 before completing their chase in the 9th over of the second innings, George Valentine taking the solitary scalp for visitors.

On Sunday Alderley's Third XI suffered a 5-wicket defeat to Hyde in their first 45 over fixture of the season at Moss Lane. The hosts posted 130-7 off their 45 overs after being asked to bat first with opener Shabz Qasim top scoring with 52.

At 46-3 the young Alderley attack were making a good first of defending their total but steady contributions from Hyde's middle order and a partnership of 44 from James Richardson and Nevan Meisuria was enough to break the back of the chase and see the visitors home in the 38th over with 5 wickets in hand.