Cricket: Patient approach pays off as Oxton see off Alderley 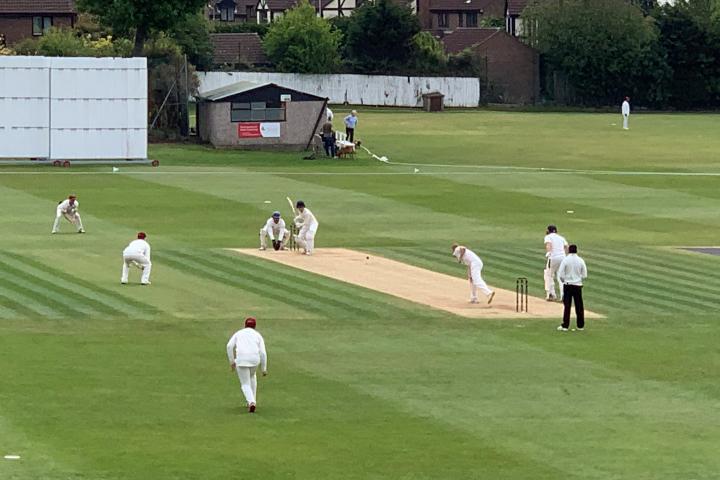 Alderley Edge First XI slumped to their second defeat of the season at Oxton on Saturday in another close match in the Cheshire County Premier League.

Winning the toss, Alderley skipper Charlie Reid elected to bat first but the visitors' top order was soon in trouble at 27-3 with ex-Australia fast bowler Joe Mennie (3-39) giving the hosts the early advantage on a pitch that was proving difficult to score on.

Number 4 George Bell steadily got Alderley's innings up and running again hitting 65 from 74 balls putting on 81 for the fourth wicket with Oli Kenyon. A tidy spell of 3-41 off 17 overs from left arm spinner Jordan Collier stopped Alderley from breaking the shackles during the middle overs and accounted for Bell to stimy the visitors' momentum with 20 overs left in the first innings. Kenyon continued to hold the Oxton attack at bay registering 33 before eventually becoming the 7th wicket to fall with the score on 138.

Kiwi James Naylor played some attractive shots in his 17 not out to push Alderley past the 150 mark but a burst of 4-44 from seamer Chris Stenhouse ran through Alderley's lower order to dismiss the Moss Laners for 163 in the 52nd over.

Economical spells from Naylor and particularly Charlie Reid, who took 2-20 from 17 overs, helped Alderley seize control of the second innings with Oxton only passing 50 in the 24th over but crucially with 9 wickets still standing. At 54-3 the game was still looking in Alderley's favour but a 50-run partnership between Henry Dobson (21) and Matthew Jones helped to pick up the Oxton scoring rate into the final overs.

A crucial run out from George Bell accounted for Jones for 45 to leave the hosts on 139-5 but the extra overs they had claimed from Alderley's innings gave them time to manage the chase which was completed by the evergreen Jack Smith who hit a composed 23 not out from 46 balls in the company of Mennie who struck 15 not out to give victory to the men from the Wirral, Alderley taking 6 points from the fixture.

In Second XI action Alderley suffered defeat at the hands of a strong Nantwich side at Moss Lane. Batting first the visitors racked up 253-6 on the back of opener Ben Wright's 87 and 106 from wicket-keeper Philip Marsh leaving them in a position to declare with 6 overs of their innings remaining, George Valentine taking 3-54 as the pick of the Alderley attack. Alderley began their reply on the back foot at 5-2 and were not able to recover as several batsman got into the 20s but were unable to carry on to land the big score the hosts needed to threaten Nantwich's total.

Blair Campbell top-scored for the home side with 31, David Johnson showing some lower order resistance with 24 not out from number 10 before Alderley succumbed in the 40th over for 157 with Ben Jarvis taking 3-47 for the visitors.

On Sunday Alderley's 3rd XI suffered a narrow 10-run defeat in T20 action against North East Cheshire at Moss Lane. Winning the toss and batting first the visitors hit 132-4 with 40 not out from number 5 Daniel Mullany and 33 from Rob Bowden the main contributions, Stan Price taking 2-21 for the home side. 34 from opener Liam Yahathugoda and 52 from Tejas Rao in the middle order kept the young Alderley side in touch with the asking rate but a late burst of 2-13 from Mullany with the ball gave the visitors the spoils.