Hockey: EH National League resumes - One Victory and One Loss for AEHC 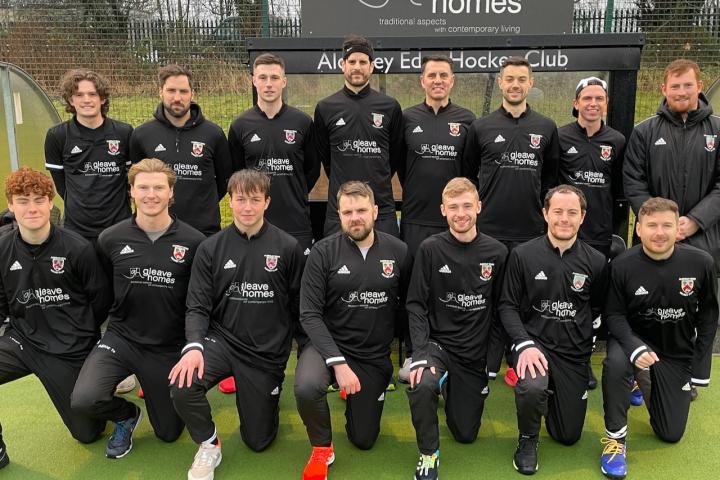 After the winter break the EH Vitality National League North conference resumed with Alderley Edge facing local rivals Timperley, the men playing at the Edge and the Ladies travelling to Timperley.

On a wet, windy, grey afternoon, Ladies 1s took on top of the table Timperley with their new year, new start, new coach, new approach and bagged 3 points with a stunning 3-1 victory.

The French rugby team and an inspired pre-match team talk got everyone in the winning spirit with the announcement of Bex Ward and Sarah Hopkins selection for Over 35 England Hockey Masters.

Along with Imogen Walkers motivational teamwork video, followed by an intense and focused warm up the Ladies we're ready and raring to go.

The game started fast and furious with Imogen Walkers shot hitting the post in first 3 minutes and lots of circle entries from Edge taking place. The first quarter finished 0-0 after the Ladies 1s hit Timperley hard and as intended, took the game to them!

Despite the strong start, and against the run of play, Timperley broke through the middle and scored in the second quarter putting the Edge 1-0 down and knocking the wind from their sails.

Quarter 3 saw the return to the pitch of Captain Sophie Hetherington and an almost immediate equalizer from POM Lottie Dennet. A skillful drive through the middle and smash from top right, left the Timperley goalkeeper reeling and levelled the score to 1-1 going in to the final quarter.

The typical fast and furious fourth quarter began with the Edge showing off their fitness and fire leaving Timperley in awe and with no comeback.

Throughout the game our Defensive short corners were top notch, and Player of the match keeper Grace Hardy was on fire, keeping Alderley in the game and allowing two goals to be scored making the final score 3-1.

The second goal was created by 3D skills from Imogen Walker to Claire Robinson on the penalty spot who delivered a slap kicked back from the keeper and deflected into the goal by Sacha Hateley.

The third goal followed quickly from a short corner injected to Sarah 'Hoppo' Hopkin at top, a skilful slip left and a demon drag flick from Charlotte Dennett to the top left corner!

Even when pressure was being piled on at the end, the Team stayed calm and collected, securing a much deserved, fantastic win and three points.

Overall, a fabulous team performance from each and every one of the Alderley Ladies showing amazing team spirit, connections, cohesion and communication.

Alderley welcomed 2nd placed Timperley who had won their last 6 games to the Edge as the National league resumed , with Alderley knowing that every game will be key due to the tight nature of the league standings.

Apart from a couple of early scares of quick high balls from Timperley, Alderley had a very strong first half showing good tactical awareness , good ball possession and looking in control of the game.

However it was Timperley who took the lead against the run of play after a lack of concentration saw the Timperley number 13 with a one on one that resulted in him winning a penalty stroke that was converted to give Timperley a 1-0 lead.

Alderley got a deserved equalizer in the 22nd minute with Archie Benton finishing off a well worked passage of neat , quick passing through the opponents half and into the circle.

The second half came with the opportunity for Alderley to build and look for the victory, however the team lost its way in the 3rd quarter, losing a bit of composure, taking a few too many touches on the ball and not creating the patterns of play that make the team difficult to play against, Timperley became more confident and pressurized the defense into mistakes , winning and converting a penalty corner in the 42nd minute to take the lead.

The final quarter went a little scrappy and despite the promptings of captain and man of the match Si Parr Alderley could not get back into the game and Timperley scored their 3rd and final goal 5 minutes from the end to take points.

A lot of positives taken from the first game back but equally areas to be worked on for the upcoming key league games.

The AEHC junior teams left in the England Hockey Cup competitions were in action on Sunday, the Boys U14 and Boys U16 teams had byes in their respective competitions ,the Boys Under 18s faced Oxton in the Quarter-finals of the T2 Championships , drawing the game that they should have won 0-0 and then exiting 5-4 on penalties, the Girls U14 had a thumping home win V Doncaster to progress to the Semi-finals in the T1 plate and the Girls U16 also progressed to the semi-finals after a great 4-1 victory away at Wakefield.

The Ladies 1s look forward to welcoming Neston to the Edge next Saturday 12th at 2pm and the men1s travel to Didsbury on the 13th with a 2pm start at the Armitage Centre.