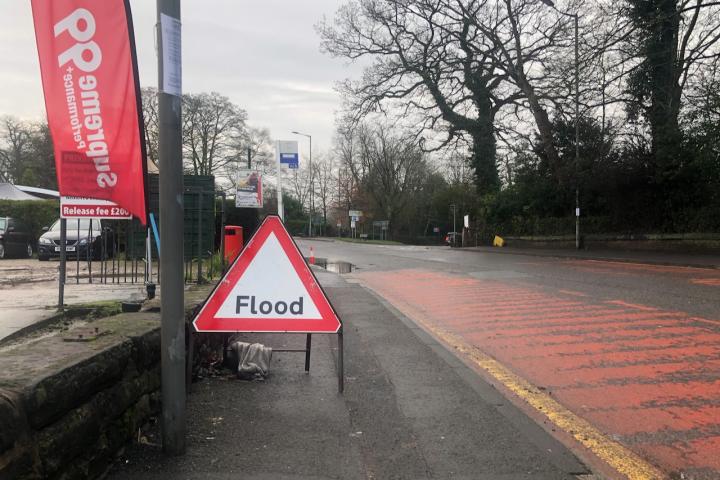 Cheshire East Council says it is putting pressure on United Utilities to resolve the flooding issues on Wilmslow Road which have been ongoing for years.

Residents and local councillors have been increasing frustrated with the floods which appear after every period of rain.

Whilst work was carried out in December, during which traffic lights were in operation at the busy junction, this was unconnected to the flooding issue but due to Cadent Gas carrying out emergency repair work at this location.

Cllr Craig Browne, Alderley Edge Ward Councillor and Deputy Leader of the Council, said "On Monday 13th December, I welcomed our Local Area Highways Officer to Alderley Edge and together we inspected a number of issues around the village, including flooding on Wilmslow Road. The officer has taken away an action to press United Utilities for some resolution of this long-standing issue."

He added "In 2019, the joint administration at Cheshire East Council took a decision to increase investment in our gully emptying programme, recognising that a number of gullies had not been emptied since the council's inception. As a result, from this year all gullies across the borough will be emptied on a biennial cycle.

"Our online gully checker shows that the gully outside Piccolino was last emptied on 27th August 2020 and that it is next due to be emptied in March 2022. On inspection, the gully was found to be flowing, although the silt level had built up to 100%. This is symptomatic of a blockage in the sewer network that the gully feeds into, further evidenced by the sink hole which developed at this location late in 2021 and which was repaired by United Utilities.

The information from the online gully checker can be found here.

Councillor Brown added "Unfortunately, Cheshire East Council is not in a position to require that the utility company carry out investigations of or proactive maintenance to their network; however, we do seek to work with them constructively, as is the case with all strategic partner agencies.

"Once Cheshire East Council is able to obtain further information from the utility company, I will of course provide residents with an update on this frustrating situation."

Steve Hughes
On a related matter, surely the council DO have the right to require United Utilities (or whoever carried out the supposed work a year ago) on London Road leading to the A34 roundabout which despite a £1m spend linked to the farcical mixed bike lane that was stated to include resolving the flooding issues. The flooding at that point is much more severe, consistent and I'd argue as much or greater risk to motorist and pedestrians.

Ian Forde-Smith
Agree 100% with Steve - Alderely Road floods far more frequently than Wilmslow Road and presents a greater hazard/risk. I’d like to know who is ultimately responsible for sorting these issues out for Tax Payers ???

Marcus Holt
If its UU that are responsible for this then sadly it has nothing to do with the tax payers or the council...the article implies that the council are putting pressure on them and I would imagine it is a case of having to go to court if its still not sorted in a timely fashion. Yep it's a pain and needs sorting but griping at an organisation that has no responsibility for repairs is futile. But hey its another good chance to moan again about the 1million spend on another part of the rd that has been explained on this site time and time again from what i can see.

By way of an update, I have arranged for Cheshire East Highways to attend this location tomorrow in order to carry out further gully emptying, jetting out and inspection of the service chamber in the adjacent footway. Similar works will also be carried out to the gully at the junction of Davey Lane and Wilmslow Road. In the event that these inspections identify drainage system defects that are the responsibility of either United Utilities or Cadent Gas, the council will seek to recharge the costs of this work to those companies.

Tony Haluradivth
Thanks for the update Craig, at least we are being granted a proper "Dry January" in the region. ;)