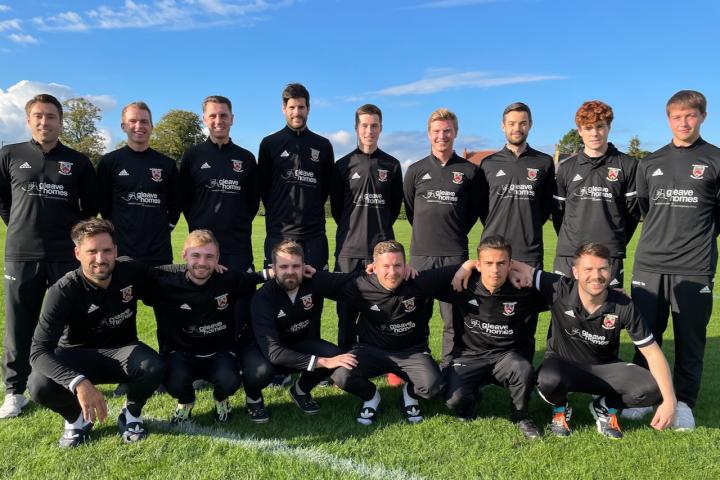 With the men hoping to continue their form from last week's win away at Wakefield, Alderley started fast, welcoming back captain Parr. However, a few minutes in and his injury started to flare up again and his game was cut short. This didn't halt the fast start to game, with Alderley scoring first. A well worked team move ended with a simple deflection from Gregory, lifting the ball over the keeper from Whitehead's sublime cross. 1-0 to the Edge and looking comfortable in the first quarter.

Leeds began to up the tempo and press Alderley at the start of the second quarter. The back line of Bradbury, Wood, Jones and Lowen looked comfortable until a misplaced pass was seized upon. The Leeds forward saw space to run into and finished with a fine reverse stick shot across the goal, making it 1-1. Leeds kept up the pressure and finally took the lead after a triple save from Riley saw a final strike beat him, 1-2. Alderley started to get a foot hold in the game just before the break. Good pressing from Warburton and Benton saw a double save from the Leeds keeper to give the visitors with a narrow lead into half time.

The second half started with Alderley looking to put the pressure on early; Smith and Benton pressed the Leeds defence, creating another chance to equalize for Gregory, but another double save from the Leeds keeper saw the opportunity squandered and then a few sloppy tackles created an opening for Leeds, which was dispatched with another fine reverse stick finish. Leeds turned up the pressure with Edge chasing the game, hitting the bar and numerous saves from Man of the Match Riley kept Edge in the game.

The fourth quarter saw Alderley pushing for goals , keeping the ball and switching the play, Alderley looked like they were going to get something from this, but time was running out.

The game finished 1-3, Leeds moving 4 points clear of Alderley. Not the result Alderley were hoping for after last week, but some positives to take away. Leeds deserved the victory.

Onto the next one, another home game, against Beeston, Saturday 6 th November, at 4.30pm at the Edge.

The Ladies started with a new formation and struggled to settle and were not switched on all over the pitch leaving some open spaces to play through the middle. Leeds exploited this well attacking in numbers and managed to get 2 early scramble goals in the D. After a good talking to after 1/4 time Alderley were ready to put that behind them Alderley picked up the game in the 2nd 1/4 and with numerous PCA upgrades in the circle.

After a change in formation which gave more security in the middle of the pitch Alderley soon settled back into playing their style of hockey.

They looked more in control, threatening on the break and played with more grit. This led to some good chances in the circle with a number of shots on goal from Lottie Dennett, Sacha Hateley, Immy Walker and Bex Ward, sadly just going wide!

Alderley went into the 4th 1/4 1-2 down but their momentum was good. Alderley took some more risks and pressed a little higher which unfortunately left them a little vulnerable on the break. Leeds took full advantage of this and scored on a quick counterattack, final score 1-3

Still positives to take away including plenty of PCA opportunities and some good quick shots on goal by a number of players to take into next week's game against Didsbury Northern with a 2pm Push back at Home at the Edge.

MOM was awarded to Lottie Dennett for her awesome work rate on and off the ball, incredible jump backs, skill and strong ball carry breaking lines to create threats through the middle.