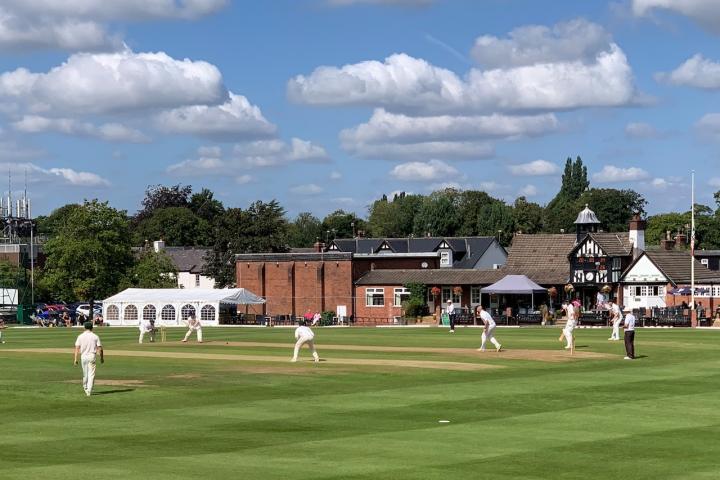 Both Alderley Edge First and Second XI celebrated clinching maximum points at the weekend after coming out on top in two nail-biting encounters with Oulton Park.

At Moss Lane Alderley's First XI batted first after winning the toss but were soon under pressure as Cheshire seamer Ben Gibbon struck early to leave the hosts on 27-2. A 90-run partnership for the third wicket between Ed Fluck and Will Valentine lifted Alderley out of trouble, Fluck departing for 52 via an excellent caught and bowled from opposition skipper Martyn East. Valentine ended with 47, dismissed with the score on 150 as Gibbon returned to inflict more damage on the Alderley batting order.

A steady 46 not out from Richard Wilkinson from number 5 provided the mainstay of the remainder of the innings with a quickfire 23 from Chris Sanders allowing Alderley to creep over the 200 run mark before a final burst from Gibbon, who finished with impressive figures of 7-50 from 15 overs, slowed things for the hosts to close on 208-8 from their 55 overs.

Alderley began brightly with the ball in the second innings reducing the visitors to 34-2 with the spin of Charlie Reid striking early. Opener Michael Robinson and Cheshire skipper Rob Sehmi rebuilt things for Oulton Park taking their score to 105 before Robinson was caught by stand-in wicketkeeper Ed Fluck off Will Valentine. Valentine then accounted for the dangerous Martyn East, the visitors slipping to 114-5 as the Alderley spinners began to exert their influence on proceedings with Valentine taking 3-23 in a tidy spell.

Sehmi continued to push the score on for Oulton Park but began to take more risks as lower order partners came and went, mainly via Chris Sanders whose 3-41 sent the score slipping to 153-8. Harry Newton hung in with Sehmi for the pair to add 46 for the ninth wicket before Sehmi, with his score on 97, took the bait from Charlie Reid to hole out to deep long off where Sam Perry was waiting to take a good catch for Reid to claim his third wicket of the afternoon. That left Oulton Park on 199-9, a score they wouldn't add to as Sanders claimed the final wicket to take a 9-run victory and 25 points for the hosts.

In the Second XI match at Little Budworth a superb spell of 4-16 off 15 overs from spinner Mark Warnes stopped Oulton Park from building any momentum in their innings after the visitors won the toss and bowled first. Reduced to 53-4, skipper Ben Tomlinson's 31 helped carry the hosts' total into three figures, dismissed with the score on 116-8 as Alderley's bowlers continued to strike regularly with Dil Yahathugoda's 3-31 accounting for Oulton Park's lower order.

Oscar Noone's knock of 21 from number 9 gave the hosts a late boost to close on 148 all out in the 48th over. A steady innings of 31 from opener Shabz Qasim provided the platform for Alderley in the early stages of the reply despite Andy Hards' 3-21 making life difficult for the visitors. At 82-5 the home side continued to fight their way back into the game but 37 not out from stand-in skipper Andy Kennedy and 29 not out from number 8 Henry Scanlon was enough to take Alderley over the line with 4 wickets in hand, Ben Tomlinson claiming 3-47 to cap a fine all-round performance for Oulton Park.

On a difficult afternoon on Sunday Alderley's Third XI fell to Nantwich by 62 runs at Whitehouse Lane. Bowling first Alderley restricted the hosts to 164-9 off their 45 overs, number 5 Alan Chesters top-scoring with 45 with Alderley's attack lead by 3-35 from Henry Scanlon. Scanlon then top-scored for the visitors with 23 as Alderley failed to build any momentum in the second innings being bowled out for 102 in the 42nd over to take 5 points from the contest to Nantwich's 25.