Cricket: Alderley bounce back in style against Neston 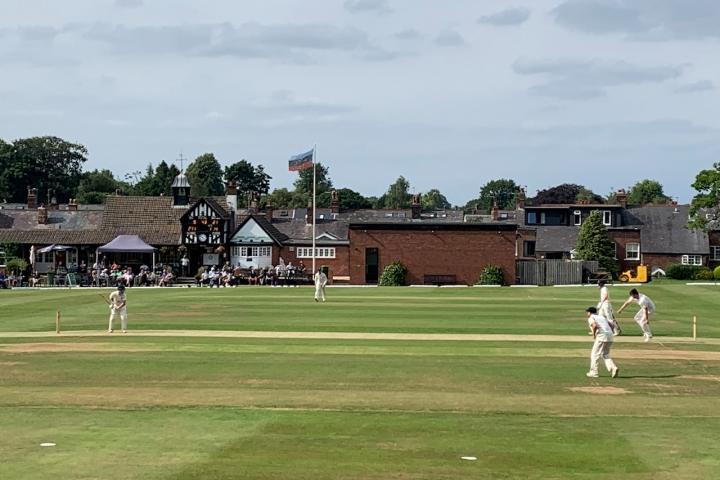 After winning the toss and electing to bat first Neston's opening pair of Mark Rowlands and Cheshire one-day captain Will Evans began with a brutal onslaught of Alderley's bowling racing to 49 in just six overs before Evans was smartly held at slip by Ed Foster off the bowling of Chris Sanders. With Dan Fesmer striking to remove Rowlands and Sanders (2-52) accounting for Dane Williams, Alderley found themselves better placed with Neston slipping to 57-3.

The 106 run partnership that followed between Neston skipper Simon Stokes and number 5 Luke Camden began to wrest control of the game to the visitors on a wicket offering few challenges for the batsmen. The introduction of Andrew Windle to the attack shortly after the drinks break provided the inroads Alderley needed with the seamer bowling Camden for 33 and removing David Hurst an over later leaving the visitors on 185-5. Stokes continued through to complete his century before becoming Windle's third victim, falling for a well made 108, the veteran collecting 3-57 from his 13 over spell.

At 214-6 the flat nature of the pitch allowed Neston's lower order to bat confidently with 27 from 33 balls for Matthew Strong and a run-a-ball knock of 36 from Luke Jones at number 9 carrying Neston to 271-8 from their 55 overs.

The second innings almost took a disastrous turn for Alderley with opener Sam Perry fortunate to avoid being run out in the second over after a fumble by the bowler attempting to break the stumps at the non-striker's end with the Alderley man way short of his ground gave him a reprieve he fully capitalised on.

After losing fellow opener Foster with the score on 27 a partnership of 233 between Perry and Tom Foreman overawed the Neston attack with the pair taking Alderley to within 12 of their target. Foreman fell just three runs short of a well-deserved hundred but Perry was not in a forgiving mood, battling cramp in the latter stages of his innings to go on and complete a superb unbeaten 151 to see the hosts home for the loss of two wickets.

On the same day Alderley's Second XI also scored a vital 25 point win against the same opposition at Parkgate to lift them out of the relegation places in the Second XI Premier Division. Winning the toss and bowling first, Alderley decimated the hosts' top order reducing them to 84-6 on the back of Ashray Bhampidipati's 5-53 off 15 overs. Neston's lower order rallied with skipper Daniel Wakefield hitting 44 from number 7 adding 64 for the 7th wicket with number 8 Chrissy Lacey who struck a battling 47 not out to carry the home side to 170-9 off their 50 overs.

Alderley started brightly in the second innings with 36 from opener Calum Wilson and 57 from Dil Yahathugoda carrying the visitors to 113-3. Three wickets apiece for Guy Bradshaw and Paul Stimson clawed things back for the hosts as Alderley slipped to 123-6 but composed knocks of 27 from Ben Lambert and 27 not out for Bhamidipati, to cap a fine all-round performance, saw Alderley across the line with 3 overs to spare to claim a 3 wicket win.

On Sunday Alderley's Third XI fell just short of the required total against Sale at Moss Lane, recording a losing draw. Winning the toss and batting, the visitors racked up 220-4 on the back of 72 from opener Jamie Coombes and 72 not out from skipper Ian Habershon, Chip White claiming 3-54 for the hosts.

Alderley's young side made a good fist of the chase with 43 from opener Sam Woolf setting them on their way and 63 from Tejas Rao keeping Alderley up with the asking rate but a spell of 4-44 from Callum Ross took the momentum away from Alderley's chase to leave them on 199-7 off their 45 overs picking up 6 points to Sale's 14.