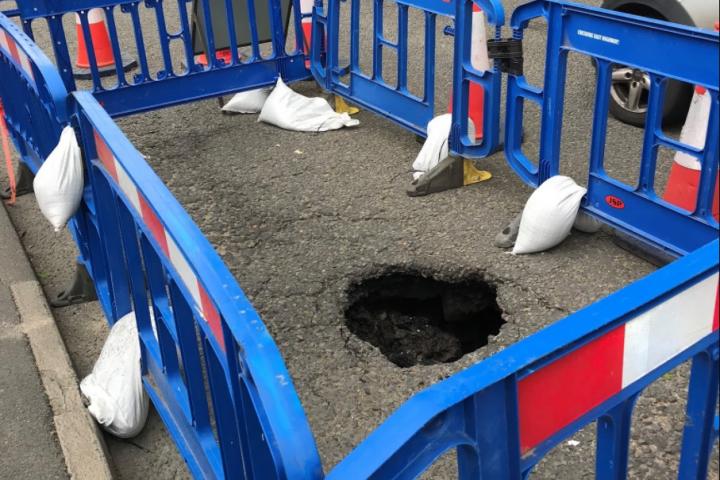 As many residents will have noticed, yesterday afternoon a sinkhole appeared on Wilmslow Road, on the section between the Tower Garage and Piccolino's.

Safety barriers have been put in place by engineers from Cheshire East Highways who have carried out in initial inspection of the site.

Councillor Craig Browne said "Early indications suggest that the sinkhole is the result of a collapsed sewer (which falls under the responsibility of United Utilities).

"United Utilities have been informed and are expected on site shortly to carry out a more detailed investigation. Assuming a sewer collapse is confirmed, United Utilities will then bear the responsibility for carrying out any subsequent repair works.

"In the meantime, I am in regular communication with Cheshire East Highways and will provide an update when there is more information to share.

Andy Brown
Anyone want a bet on whether this will be fixed within say three months?

David Hadfield
Whilst that is being repaired, could the council also arrange for double yellow lines to be painted all along that main road area outside Piccolino's as parking there is a dangerous joke, as most people know.

Nigel Greensides
Were are all of the bone idle Piccolino customers going to park their cars now?

Tony Haluradivth
Glad to see that Craig is already looking into this ;))) (sorry I could not resist it).

On a more serious note I totally agree on the need for double yellow lines as the Darwinian awards for Parking could be handed out to the idiots last Friday. Furthermore was there not this very same issue (sink hole) which occurred not 3 years ago. UU finally came to repair it after a long and irritating delay for road users. Why did they not make good those repairs then???
Message to Craig can you put significant pressure on UU to complete works urgently? They left it far too long last time.

There is a free to use public car park just 50 yds away and it’s virtually empty during Piccolinos evening opening times - but 50 yds for a tipsy socialite in high heels??

Unfortunately for us on this occasion, but quite understandably, United Utilities are always likely to prioritise customers who are without a fresh water supply; however, I have asked them to keep me updated.

With respect to inappropriate parking, any traffic regulation order is subject to full public consultation and must be backed by a legal order in order to be enforceable. This takes time, but is being pursued (not necessarily in the form of yellow lines).

Vin Sumner
Surely some of the parking outside Pico's is already illegal because of the pavement is not passable by a wheelchair. In addition, is there not some rule about parking opposite a junction , the view coming out of Ryleys lane is now dangerously curtailed and its an accident waiting to happen.

Fiona Doorbar
Exactly Vin....the police are not enforcing the situation now so why will lines make a difference?