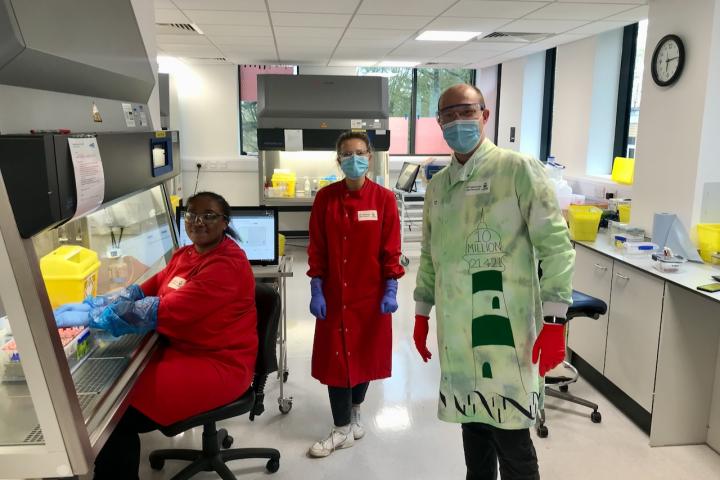 The MDC Lighthouse Lab in Cheshire, which plays a key role in the UK Government's Covid-19 testing rollout, has announced it has processed its 10 millionth test.

Operated by Medicines Discovery Catapult (MDC) and staffed day and night by over 700 trained specialists, the lab has now tested a total number of samples equivalent to testing almost a fifth of the UK's population since it launched in April 2020.

Dr Mark Wigglesworth, Director of the MDC Lighthouse said: "This is an incredible milestone for an individual laboratory to reach, and highlights the huge contribution MDC-Lighthouse have made to the national testing effort for Covid-19".

"I am hugely proud of all the staff that have contributed to the creation of the Lighthouse facility they are constantly pushing the boundaries to deliver high throughput, efficiency and quality."

"In the same week that we passed 10 million samples we have also been recommended for accreditation to UKAS 15189; demonstrating that this throughput comes with the highest level of quality and confidence in the data."

Chris Molloy, CEO of MDC, said: "The Lighthouse network, which a huge army of volunteers helped establish, and many more are now running, has made it possible for the government to accurately target their response to the virus.

"It tested over three million people in its intense first 100 days and the overall network has now run tens of millions of tests. This has kept the nation informed on how we're doing in the fight against Covid-19 and directly enabled vital parts of the country to continue functioning.

"MDC's Lighthouse Lab has seen its work directly impact entire communities, such as Leicester and Liverpool, and through its scientific skills and dedication, it has tracked new variants, which helps the whole nation respond quicker in a rapidly changing pandemic.

"But the true story of this year and which matters most to me, is that we're part of a collective effort. This response harnessed the power and goodwill of people; putting others first and helping one another to do the right thing."

"Most of us did not realise what we did not know one year ago, but people were always on hand, ready to say: "Yes of course".

"Where we have succeeded, it's been because of the talent and the commitment of our teams. We've shown what a remarkable force we are and how we can bring collaborators together to be even more successful.

"And so, to the many people involved in making this work, through every task no matter what, I want to say thanks for their dedication to getting this right and to the mission. We are a vital link in the national chain.

"Whether you were involved in setting up the labs, carrying boxes, unpacking equipment, taking on and learning new non-scientific roles, working the night shift after your day job, putting your studies on hold, coming back from retirement, taking on extra work to make this a reality or any of the other many ways you have all contributed, you have made a difference.

"In taking on this challenge and lending yourself to the fight against Covid-19, you have put others first, and many millions of people have benefited as a result.

"Today, we have over 700 staff members who work tirelessly both day and night to ensure the smooth running of the Lighthouse Labs network. The testing figure we've reached this month would have been impossible if it wasn't for their expertise and hard graft – which we've seen in abundance and we've been incredibly grateful for."

He concluded: "I wish to thank our teams of today and earlier in the year behalf of the ten million people whose lives they have touched through their dedication and hard work."

Earlier this year, MDC-Lighthouse's scientists identified the new emergence of the UK Covid-19 variant in the lab and were able to use this new information to track its spread across the country which helped tackle the outbreak and break chains of transmission.