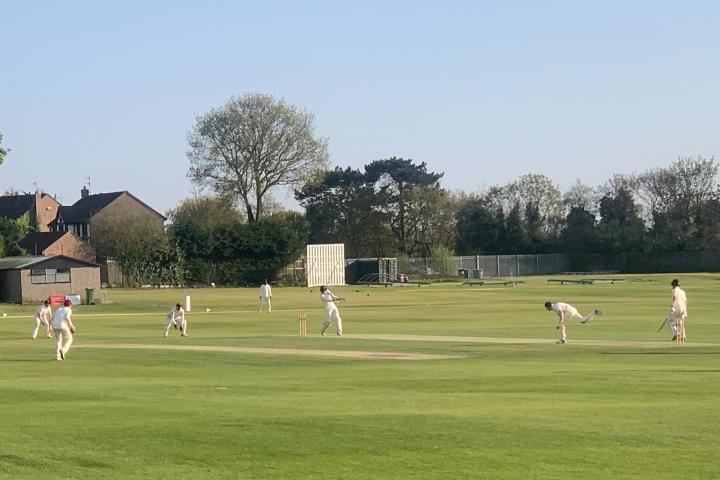 Alderley Edge Fist XI fell four runs short of victory at Oxton on Saturday in another high scoring game in the Cheshire County Premier League despite a brilliant hundred from opening batsman Sam Perry. Winning the toss and electing to bowl first Alderley contained things in the early stages, Chris Sanders striking twice in an over to leave Oxton on 52-3.

A disciplined spell from Richard Wilkinson (2-46 off 17overs) helped contain the hosts in the middle overs and at 107-5 Alderley looked to be squeezing the home side to an under par score on a flat pitch in good batting conditions. But Alderley had failed to shift opening batsman Henry Dobson who went on to compile a 95-run partnership with wicketkeeper Andy Roberts (49) for the sixth wicket and added 46 for the seventh wicket with Oxton's overseas player Damario Goodman (26 not out). Dobson went on to carry his bat finishing unbeaten on 113 as the momentum shifted to the Wirral side ahead of the tea interval closing on 248-6 from their 55 overs.

Alderley's openers made steady progress in the second innings reaching 50 before Goodman struck twice in an over to leave the hosts on 50-2. A 94-run partnership between Sam Perry and Ed Fluck kept Alderley in the hunt but the dismissal of Fluck for 48 brought a flurry of middle order wickets with the visitors slumping to 165-5 on the back of Goodman's spin picking up 4-49.

Perry began to accelerate as he was joined by skipper Charlie Reid, the pair putting on 65 for the sixth wicket with Reid hitting 24 from just 20 balls. Reid and Perry fell in quick succession to the returning Chris Stenhouse (4-48) but not before Perry had notched a fine 115 to continue his strong start to the season. Some lusty blows from Chris Sanders gave Alderley a sniff deep into the second innings but after he holed out to long on the remaining runs proved too stiff a chase for Alderley's tail with the visitors closing on 245-9. The draw gave Oxton 15 points to Alderley's 7.

At Moss Lane Alderley's Second XI also recorded a high-scoring draw against Bowdon despite another opening batsman registering a ton. Winning the toss and bowling first Alderley made early inroads to leave the visitors on 35-2. There was little further success with the ball for Alderley though as number three Thomas Graham hit 124 and Michael Playle an unbeaten 68 to take Bowden to 268-3 where they declared with 7 overs of their innings remaining.

Opener Dil Yahathugoda rose to the challenge striking 117 in his second game for the club with support coming from Ben Lambert (35) and skipper Jonny Usher (38) as the home side kept pace to overhaul their target for the majority of the innings but a late burst of 3-70 from Hal Dwobeng slowed the latter part of the chase to leave Alderley 11 short of victory closing on 258-8 after another encouraging performance with the bat. Bowdon took 14 points to Alderley's 6.