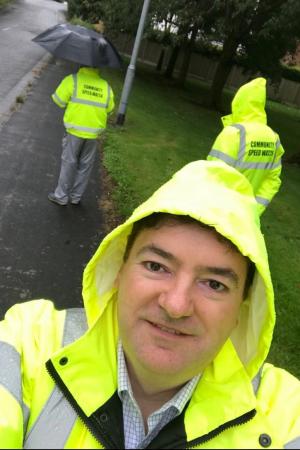 Local Community Speedwatch volunteers held their first session for several months as the group have been able to do so since the pandemic began.

Councillor Craig Browne joined the volunteers on Thursday 27th August to monitor the speed of passing traffic on Ryleys Lane.

Councillor Browne said "We decided that it would be appropriate for the group to re-start, provided social distancing guidelines could be strictly followed.

"As it turned out, we had to cut the session short due to heavy rain; however, between 3.00 - 3.45pm we recorded a total of 36 vehicles exceeding the speed threshold at this location. Of those vehicles recorded, 24 were speeding at or below 39mph and a further 12 were travelling faster than 40mph, with a top speed of 47mph."

He added "The figures are particularly concerning as Ryleys Lane is of course a school safety zone. I am continuing to work with Cheshire East Highways with a view to introducing a permanent 20mph zone with supporting traffic calming infrastructure in this area of the village."

Kathryn Blackburn
The cause of most accidents around the school entrances is caused by the chaotic pick up parking. Maybe that should be tackled first.

Again you are pointing the camera just before the 50 mph sign. If this exercise is being carried out in the name of safety statistics then take your team to mid position on the 30 mph stretch of the road adjacent to the school. Let's get it right.

Thank you for your comment. Our Community Speedwatch volunteers have asked me to point out that the sessions are carried out a good 100 yards inside the Parish boundary (where the speed limit changes); furthermore, the speed gun detects moving vehicles at a distance of over 100 yards in the opposite direction, so that at the time the vehicles are recorded they are at least 200 yards from any change in speed limit. The location is chosen in part due to its proximity to the entrance to The Ryleys School (itself within a 20 mph safer school limit) and partly so that volunteers are clearly visible to drivers, which is one of the requirements of the Community Speedwatch scheme.

Kathryn Blackburn
Thank you Craig. From the photograph it appeared to me that the team is standing in the usual spot behind the hedge at the Chorley Old Road junction.
My point is and I believe the Government agrees as it is currently changing legislation to prevent the haphazard parking at or near schools, that this is what has, does, cause the accidents on Ryleys Lane. Perhaps you might in the interest of safety be looking into that. Those that drive at excessive speed will not adhere to a 20mph no more than a 30mph - unhappily.