Police drone takes to the sky 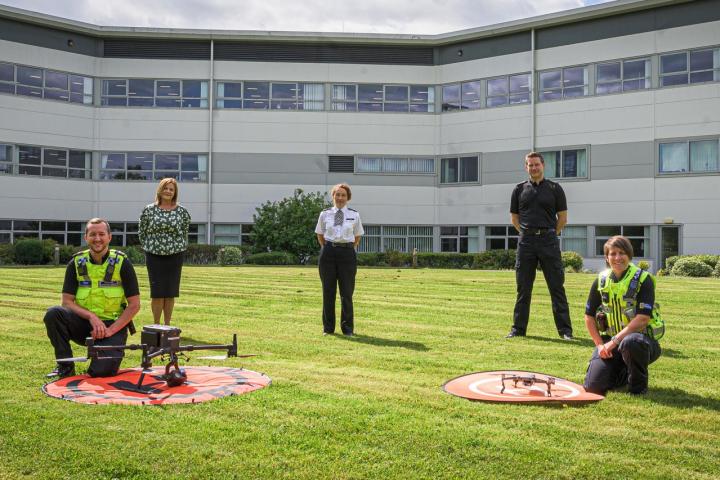 Cheshire Constabulary has a new piece of kit, the force's drone officially takes to the sky from today (Monday 24 August).

The Matrice 300RTK drone, which is also known as an Unmanned Aerial Vehicle (UAV), will equip the frontline with a useful tool that can support officers in their daily duties.

The force has recruited and trained up a team of officers who make up the Drone Support Unit, which includes three officers and a sergeant.

The unit is based at the headquarters in Winsford and will assist with:

Chief Inspector Gareth Wrigley said: "A few short months ago the unit formed, and the team have been working hard to get to this point, where the drone can officially take to the skies to assist with frontline policing.

"I want to reassure the public that the drone will not be used for general surveillance and will only be used for incidents and operations.

"Having drone capability will make a huge difference in the way we protect vulnerable people and gather critical evidence at scenes. This is a really exciting time for the Constabulary which will increase our tactical options to help make Cheshire even safer."

The Police and Crime Commissioner for Cheshire, David Keane, said: "Police currently use the National Air Support Service (NPAS) for all its aerial requirements such as search and photography. Although manned aircraft will always be required for some operational activities, there are opportunities, such as when aerial photography alone is required, that drones would be more suitable, quicker to deploy and more cost-effective.

"The drone will bring huge benefits to frontline policing in Cheshire and I am really pleased that the force is now in a position to start using the drones on a day-to-day basis to help keep the public of Cheshire safe."

David Smith
About time and a great idea - if we aim to have a drone in every town. A drone would be ideal for spotting parking offences and quickly directing 'Traffic Wardens' to the offending vehicle with maximum efficiency. Drones can do almost as much as a helicopter but for less cost and often with less of a 'footprint' so appearing less visible.
For once a step forward and taxpayer's money well spent.
When do we get ours in Wilmslow?

Jon Williams
Parking offences are not a police problem, that's the council so they won't use them for that.

Vince Chadwick
The drone and its operator will be a useful tool in aerial policing as described in the article, often saving the expense of using a helicopter while being more stealthy. But you don't need to go to the expense of employing a drone operator and drone for something as simple as locating illegally parked cars.

Traffic wardens walking the streets can do that, so that's what we need.

Tony Haluradivth
I am sorry but I find it slightly Orwellian. "Policing Protests"????A drone can hover and spy at you in your home unlike a helicopter which cannot get that low. They are probably investing in a few to Police us during the next lockdown which is predicted to be Christmas where the theory has been mooted we will only be allowed out to buy essentials and no exercise

Yvonne Bentley
Tony, the Cheshire Constabulary covers large city centres where Protests have previously happened and probably will happen again. They do not just police your neighbourhood

Tony Haluradivth
Which large City would that be Yvonne? Chester? It is the only City in Cheshire. Those drones will be used to persecute and harrass innocent dog walkers (just as Derbyshire Constabulary used theirs in the last lockdown. )Cheshire Police dont want to be left behind and come the next lockdown it will be spying on you. Protests are not illegal either...with or without Emergency Laws . If that person Keane gives it the thumbs up it is even more reason for me to question it

Yvonne Bentley
My apologies, I should have said Town rather than City ie Warrington etc. I agree protests are not illegal until they break the law , ie Breach of the the Peace or Public Order Act and then they may become unlawful.

Stephen Justice
The article clearly states what the drone will be used for:

These seem to be important matters in which aerial video will assist.

Why do I see irrelevant comments about parking offences which are council controlled and rather dark hints at suspicion of a “big brother” in the sky?