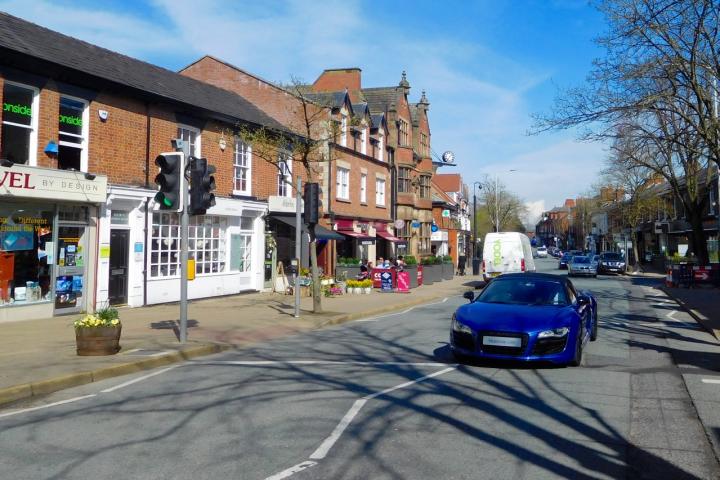 Many residents have either written to me or contacted me via social media over the course of the weekend to ask what is being done to address the issue of so called "supercars" in our village. The issue has been growing over several years, but after a brief respite at the beginning of the Covid-19 lock down, it seems that both the cars and accompanying photographers are back in greater numbers.

In 2019 I had already asked Cheshire East Highways what might be done in terms of installing traffic calming on London Road. The first stage in any process where traffic calming is being considered, is for a traffic assessment to be undertaken and this took place last November at three locations: outside the former RBS, by the crossing adjacent to the newsagents and by the De Trafford Arms.

The results of the traffic assessment show that at the first two locations, 85% of drivers are travelling at or below 26mph; however, outside the De Trafford Arms they are travelling at or below 34mph. I am advised by Cheshire East Highways that the statistics do support the introduction of a new 20mph speed limit and officers are now considering appropriate traffic calming measures to enforce this.

In the meantime, I have been in discussion with senior officers from Cheshire Police and have asked for a more visible presence at weekends (when most of the problems seem to occur). I have also asked officers from Cheshire East Council to give consideration to introducing a Public Space Protection Order in the village centre, which would make revving engines etc an offence.

Public Space Protection Orders will only be introduced by the Council where there is confirmation from Cheshire Police that such action is necessary. I have therefore called a meeting of all the relevant parties, including the Chair of Alderley Edge Parish Council, to determine the most appropriate way ahead. Any proposed action will be subject to full public consultation.

Pete Taylor
Well done Craig. Whilst I have been aware of the noise on the bypass and other roads for many months I had not seen what was going on in the village. This You-Tube video is just one of many illustrating how bad things are:

Perhaps anyone intending to comment here should watch it before doing so?

Alan Brough
Many thanks Craig,

The increase in noise and dangerous (show-off) driving has increased exponentially in recent months.

Like many others I enjoy the sight of
well engineered motor cars around the village but this has morphed into something else.

The dangerous stop / start accelerating along London Road and the 360 degree doughnut turns at the Ryleys Lane and Macclesfield Road junctions are dangerous.

Having had friends killed and seriously injured in road traffic incidents, I’m aware that what some regard as letting off steam can get quickly and badly out of hand.

In addition the noise is pretty much constant on sunny weekends and evenings. It’s anti-social, inconsiderate and illegal.

The drivers and their little band of photographic followers can take their circus show to Oulton Park circuit just a few miles away, organise a track day and leave the village to those that want to go about their business in peace and safety.

Martin Wienholt
Thank you Craig for having given this issue much thought and your discussions already taken place with some Authorities and agencies .I do feel traffic calming measures to be a broad brush solution and would not address the main problem of being noise and pollution . Indeed, speed ‘’ bumps’’ would just be a constant irritation to the 99% of careful drivers .
Better surely would be to concentrate on the minority transgressors. If a PSPO were in place then would not video evidence with relevant number plate recognition be enough for prosecution and a good deterrent ? Of course Police time is limited. Could not video evidence be collected by an authorised security firm or similar ?

Tony Haluradivth
Thanks Craig for your hard work in this area. Can they also consider Heyes Lane in this as we dont want that to become the subsidiary race track. We got a few days respite at the start of lockdown and now traffic is busier than ever including builders wagons speeding down every few minutes (it's not the hay wagons folks) moving soil from a vast development in Mottram to somewhere else.(I hope they are not moving it onto the farm over at Morley Green near Rossmere illegally as I beleive that is still awaiting a Council decision). The noise and resultant traffic pollution from this too is very unsettling

Mike Taulty
I've seen these cars and the photographers in the village for quite a long time now and have witnessed some of the types of behaviour that Pete's shared video highlights.

I also see these cars further down the A34 in Nether Alderley where a minority of the drivers treat the 40mph road as a race track and pass by at perhaps 60-80 mph in an area where people are walking, cycling, riding horses, taking their children to/from the school or maybe hoping to just pull out of their driveway without encountering a speeding sports car coming the other way.

This mostly seems to happen at the weekends and in the nicer weather and it's not uncommon to see the same car pass multiple times which suggests a driver who is doing "laps" rather than travelling somewhere.

Pete's video seems to highlight a number of cars with visible license plates performing manoeuvres which look to be illegal - e.g. driving without due care and attention, breaking the speed limit.

I can understand that the Police sitting roadside aren't really likely to stop this so can someone confirm whether the Police are able to take footage from the public and use it as the basis for warnings or prosecutions?

If so, perhaps residents who'd like this to stop can make a point of capturing their own footage of these cars and submit it to the Police?

I heard a Mercedes supercar approaching last week so stopped, turned and pointed my phone camera at the driver. He slowed right down :-)

Verity Williams
I feel like this ‘issue’ needs clarification. Importantly, the majority of cars being driven obnoxiously in that video are not remotely supercars. They’re boy racers. The supercars in the video were as likely to be driven passively as the next Micra. So this is not necessarily a ‘supercar issue’. It’s a ‘car issue’.

However, when this ‘issue’ is discussed please can you be clear about the underlying cause of the complaints? Is it the noise? Or the stunts? Or speeding? Or that many longer term AE residents don’t like population changes to the village and scapegoating ‘supercars’ is an indirect way to target them?

If it’s noise, speed calming measures won’t achieve anything. The drivers will just rev at lower speeds. Along with the PSPO suggestion, maybe look at banning idling engines, too.

The stupid stunts on public roads deserve police attention. But again, they’re not undertaken by the majority of genuine supercar drivers. Plus they’re rare, I’ve never seen one in person, only on that video.

If it’s speeding, and the issue is simply breaking the law, put a camera up at the necessary spot.

If it’s speeding with the underlying assumption of safety, as Craig well knows, speeding isn’t related to many accidents in the village. Of 27 accidents in AE from Sept 2016-19, only 1 had speeding as a contributing factor (3.7%). So 96.3% of accidents happened WITHIN the speed limit. As is the case nationally, failing to look properly is the biggest cause of accidents (13 of 27 accidents in AE, or 48%). However, this could highlight a key moment for a public information campaign to address that misperception. Want safer roads? Pay more attention!

If it’s simply personal taste, I’m not sure the law is the place to look. As much as I agree that the body kits added to some of the genuine AE supercars are offenses to these feats of engineering. And there are far better ways to enjoy a beautiful machine than repeatedly driving past Costa Coffee in Alderley Edge, some people need to accept that the law allows people to drive expensive cars through AE as many times as an unimaginative driver would like.