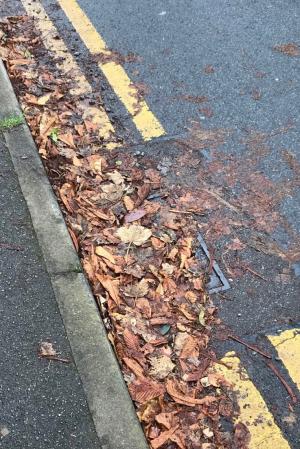 Residents are being urged to report any blocked gullies after it was discovered that every one was blocked on one of the main roads in the village.

Cllr Craig Browne said "There are 14 gullies in Macclesfield Road between the junction with London Road and Norwood Rise. I inspected them over the weekend and discovered that every single one of them is blocked! I have now reported this to CE Highways and asked for targeted action at this location."

If there are any other blocked gullies near you email Cllr Craig Browne to let him know.

David Smith
Well I suppose that's a welcome initiative. As for Wilmslow there are blocked drains all over town. I reported 70 of them to Councillor Don Stockton in 2011 with images to prove my observations - but guess what? Very little was done and many of them have been unable to drain much water away. ever since.

Donald Strathdee
Don't bother, Cheshire East Highways will not take any notice.
They will just say that it is part of their planned visit schedule, but they wont tell you what that schedule is!

Mike Davies
Agree! Cheshire East are ineffectual or just don’t care. Only way to sort it is for the village to club together and pay for it - and deduct the cost from our council tax!!

David Smith
We residents must continue to highlight shortcomings like this so that everyone will slowly become aware that too many 'Muppets' are in control of our daily lives and have mostly lost the plot.

Tony Haluradivth
Yes Brian (some) residents but many on Macc' road are blocked by the filthy cement runoffs from all those bloated developments. There is zero comeback on developers and builders for this. Last Summer I complimented a fellow elderley resident (whilst walking around Wilmslow) he was in a prone position on Broadway fishing assorted gunk out of the drain on the road near his house with his own hands). He had given up asking Highways as they said what someone else said " it is on the annual schedule"....as my grandson would say "Yeah Right!" ;))

Pete Taylor
Don’t forget that “Cheshire East Highways” is contracted out to a private company: Ringway Jacobs plc. The previous Conservative Council renewed their contract before the last election; it is a FIFTEEN YEAR contract, if you can believe it!