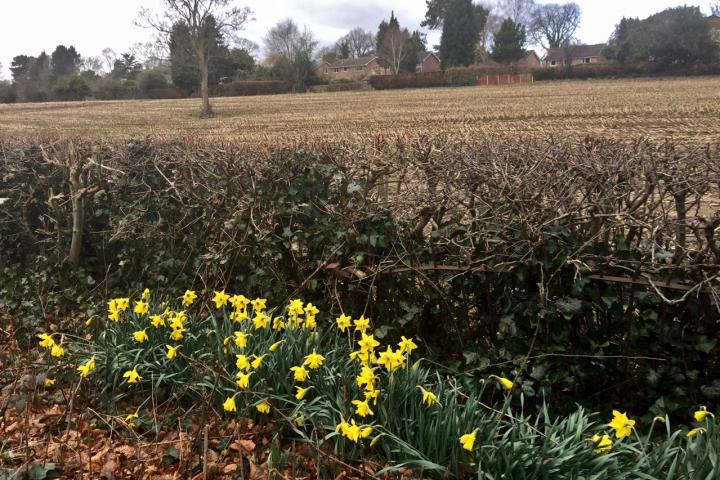 There has been much written and spoken recently about the need to plant trees to avoid a climate disaster; Michael Gove has re-stated the aim to plant 11 million by 2020 (despite the fact that actual planting has fallen way behind schedule since that number was first mentioned some years back). http://bit.ly/2YaqAJx Friends of the Earth, Greenpeace and the Woodland Trust all reckon that it should be at least twice that number; Rory Stewart in his recent Leadership election pitch pledged 100 million trees! Quite clearly something urgent need to be done, both nationally and locally.

The Cheshire East Local Plan stated that that in Wilmslow 900 new-build houses were required, much of it on precious Green Belt land; at present time this number has been massively over-shot, with 621 built, 403 under construction and a further 285 with planning consent (total 1309). The fact that the number of new houses proposed across in Cheshire East was vastly over-stated indicates that perhaps there should be a re-think on what we do with our Green Belt land instead of allowing developers to land-bank agricultural fields.

Under the previous regime at CEC there was deliberate falsification of air-quality monitoring figures which, presumably, led to some planning consents being granted where they should not have (the on-going Police Criminal investigation does not seem to be producing much in way of a result). It was perhaps never a good idea for the same department to be in charge of air-monitoring and planning consents; particularly given the seemingly out of control, gung-ho, nature of Planning at that time.

Wouldn't it be great if, instead of building (or setting aside land for) un-needed, housing we could plant trees? Wouldn't it be great if, instead of covering our local green spaces (which were unnecessarily taken out of Green Belt protection when the flawed Local Plan was rushed through at the second attempt) we could plant and open up woodlands for the people? Our then Councillors really let us down and most have paid the price.

There are several areas which would be ideal; land around Stockton Farm above Butterfly Bank and Sunnybank Farm, both of which have been subject to proposals by developers. The former Royal London agricultural fields on Alderley Road- wouldn't that make a great People's Arboretum and green gateway from Alderley? The fields to the east of the A34 by-pass between Wilmslow and Alderley; currently grass-land but also subject to speculative plans- remember that crazy idea for a "Country Park in returning for planning consent" supported by the discredited former leader of CEC? Also there is the peat bog; surely we must reinstate the sluice gates, raise the water level and plant around the margins- the current site operator has forfeited the right to any housing development, imho. They should be made to pay for the damage they have done and by breaching the conditions of licence, surely any restoration costs must fall to them.

I have to declare a vested interest: the Royal London agricultural fields are subject to Enduring Covenants, prohibiting the erection of any form of building, for all time; apparently these are not worth the paper they are written on. I am one of over thirty households which are subject to covenant; we, like the others involved, bought our house based on the fields being in the Green Belt and having an Enduring Covenant. I had a discussion over this with the former Head of Planning at CEC and he was dismissive to the point of rudeness and subsequently went on to give planning consent for housing. He also dismissed the Three Parks Design Guide for Wilmslow, something CEC took on board from Macclesfield Borough Council. Legal advice was taken by the Covenant holders and it was decided that this David vs. Goliath struggle was not something we could afford.

However, times change; there have been massive protests about Green Belt robbery in North Manchester, decisions have been reviewed and revised. Given the "change of direction" at Cheshire East, is it not time for a review to be undertaken and an immediate moratorium on new site start-up, at least until the falsified air-quality data has been corrected and any illegal planning consents revoked? After all, if Wilmslow has already more than achieved its "quota", why should further housing development be allowed? It doesn't happen in the agricultural or fishing industries, so why is house building any different? It's interesting to note the difficulty that developers are already having in selling new apartments and houses in the area; this means that they might just sit on land until they consider the market will stand more building.

As they used to say at my school: discuss!

Duncan Herald
May I add a plea re. bird life?
There is a plea for non-cutting of hedges, trees etc. between March and August, so as not to disturb nesting birds. Whether that is a Law or simply advice I do not know.
In recent weeks I have seen road-side hedges cut by CEC and cutting in both the Church yard and in the Park.
Please can you delay cutting/thinning/etc. ? Give the birds a fair chance.

Peter Bugler
Regarding hedge cutting it is advisory but subject to the being no nesting disturbance. Some hope of any operator getting out of a tractor to check. The other problem is what is left after the tractor has trimmed/slashed the hedge until it is too low and too thin for any self respecting bird to use as a nest sight. These flails also remove any saplings which might have the temerity to attempt to grow through the hedge. The picture above shows the problem very well.
I of course agree with Pete about new woodland.

Duncan Herald
Just a thought; if tree planting is planned then please could it be mainly of indigenous species as they are more likely to survive than 'exotics'.