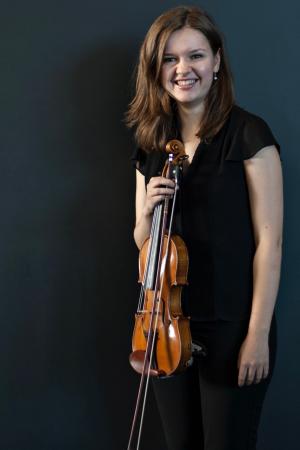 This month's lunchtime concert at Alderley Edge Methodist Church will feature a violinist and pianist from the Royal Northern College of Music.

On Wednesday 17th April, violinist, Olivia Jago and her accompanist, Imy Luc will be performing Violin Sonatas by Mozart and Grieg and their programme will conclude with "Tzigane" by Ravel.

Originally from Anglesey in North Wales, Olivia Jago is currently studying towards her Master of Music degree at the Royal Northern College of Music with the International Chair of Violin, Professor Yair Kless. She is an established freelance musician across the North West and in Wales where she has appeared professionally with orchestras including Manchester Camerata and Sinfonia Cynru as well as completing placement schemes with the BBC Philharrmonic, BBC National Orchestra of Wales and Welsh National Opera.

As a soloist, Olivia has made concerto appearances with the North Wales Camerata as well as reaching the final of the RNCM Concerto Competition in 2019. She has participated in masterclasses across Europe including at the Mozarteum in Salzburg and with notable violin performers and pedagogues such as Mauricio Fuks, Itzhak Rashkovsky, Daniel Philips and Rachel Podger. Olivia plays a 1906 Albertus Blanchi violin and is kindly supported by the James Pantyfedwen Trust, Kathleen Trust and Clive and Sylvia Richards Charity.

Imy Luc started learning the piano aged 6 with Nina Levtov. She then attended the Junior Department of the Guildhall School of Music and Drama and for sixth form she gained a place at Chetham's School of Music in Manchester. After this she was invited to study with the Italian pianist Carlo Grante in Italy and did so for two years. Currently she is studying with Dina Parakhina at the Royal Northern College of Music and is in her fourth year of the undergraduate course. In her first year at the RNCM she was awarded the Shirley Cattarall Prize for the highest piano recital mark in her year. In March 2018 she took part in the RNCM Chopin Prize and won first prize.

Imy is an experienced performer and has given many recitals around the UK. She has performed in major venues such as the Wigmore Hall, Wales Millennium Centre and the Bridgewater Hall. She made her concerto debut at the age of 17 with the Worthing Philharmonic Orchestra playing Mozart's Piano Concerto no.9. She is also in high demand as a chamber musician, collaborating with a variety of instrumentalists and singers for recitals around the UK.

Admission is by programme, priced £5.00 and available at the door.

Light lunches are served from 12 noon and the recital begins at 1pm, lasting approximately 45 minutes.

Proceeds from the concert will be donated to Marie Curie Cancer Care.