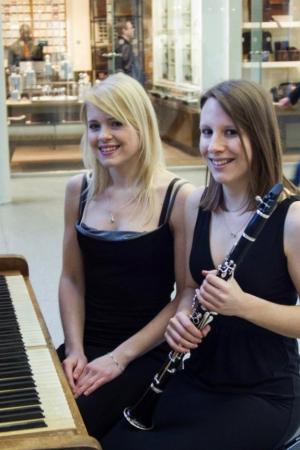 Having recently returned from a tour, performing on the Queen Mary II, their recital will comprise: Sarabande and Allegro- Grovlez; Suite from the Victorian Kitchen Garden- Reade; Hommage a Debussy- Kovac (Clarinet Solo); To the Spring from "Lyric Pieces" op.43 No 5- Grieg (Piano solo); Wedding day at Troldhaugen Op. 65 No.6- Grieg and Selection from Westside Story- Bernstein.

Jean Walker said "Sarah Douglas and Amy Wakefield are an excitingly combined clarinet and piano duo. They grew up in Stockport have performed together since childhood, as they attended the same primary school, and Chetham's School of Music. As a duo, they play in recitals around the UK and are sought after guest artists for international cruise contracts. Recent concerts include recitals at the Buxton Opera House Arts Centre and The Georgian Theatre Royal."

Amy studied the piano with Susan Bettaney at Chetham's and also studied the violin. Amy received a scholarship to the Birmingham Conservatoire and went on to study with the Head of Piano, Malcolm Wilson and Victor Sangiorgio. As a violinist, Amy regularly plays in local orchestras/ensembles and works as a session musician. Amy has recently become a mentor on the ESTA Strings CME course at Chichester University.

Admission to the concert is by programme, £5.00, available at the door.

Light lunches (charged separately) are served from 12 noon and the concert starts at 1.00 pm.