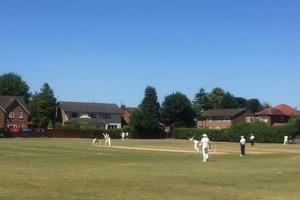 Alderley Edge's 1st team continued their current purple patch in the Cheshire County league with a fourth straight win coming at Cheadle on Saturday, the side bouncing back well from exiting the T20 competition at the quarter final stage against Marple on Wednesday evening.

In Saturday's encounter, Cheadle skipper Dan Brown won the toss and elected to bat first on another hot and sunny afternoon at the Kingsway ground. A half century for Cheadle opener Greg Dixon held the early order together for the hosts reaching 99-3 at the point Dixon was dismissed caught behind. At 127-6 Alderley's bowlers were progressing well through Cheadle's middle order despite the red hot conditions. Some late hitting from number 9 Henry Appleyard yielded 32 from 16 balls and helped to push the home side on to a score of 189-9, a potentially tricky target given the crumbling nature of the pitch in the recent dry conditions. Dan Fesmer was the pick of the Alderley attack with 3-64 backed up by Keiran Elliott and Richard Wilkinson with two wickets apiece.

Openers Calum Rowe and Alan Day set about the home attack in the early stages of the second innings racing to a partnership of 70 before the fall of the first wicket with Day departing for a quickfire 40. The onslaught from Alderley's batsmen caused Cheadle skipper Brown to shuffle his bowlers more regularly than he would have wanted and with 7 bowlers used in all in search of some containment. Rowe continued his good recent form hitting 42, departing with the score on 104 with Danny Lamb and Ed Fluck picking up the baton. A wobble in the middle order saw the visitors lose Lamb, Fluck and Richard Wilkinson within the space of 3 overs as spinners George Dickinson (2-35) and youngster Subhaan Mahmood (3-47) began to impose themselves on the game. Alderley skipper Adam Worrall played watchfully through a tricky period with 50 still required for victory before counter-attacking with a flurry of boundaries to see the visitors home 6 wickets down with 26 from 32 balls.

The joy of Saturday's victory followed the disappointment of exiting the T20 competition on Wednesday night in the quarter final at Marple by the tightest of margins, losing by 3 runs. Things started perfectly for Alderley, Keiran Elliott claiming a wicket off the first ball of the game. From there partnerships of 62 for the second wicket and 72 for the third wicket put Marple in the driving seat with opener James Morgan striking 42 from 30 balls and number 3 Mike Scholefield providing the mainstay of the innings with 60 from 50 deliveries. Alderley rallied following the dismissal of number 4 Mark Makin for 29 taking the final 3 wickets for just 22 runs, the hosts closing on 156-6. Tom Foreman bowled a fine spell claiming 3-25 with Keiran Elliott claiming 2 wickets and 1 coming from the spin of Alan Day.

In reply there were double figure contributions from the majority of the Alderley top order but regular wickets taken towards the end of the innings by the hosts left the tail with a little too much to do. Captain Adam Worrall top scored for the visitors with 42 from 34 balls from his T20 opening berth and at 141-5 Alderley were well in the hunt. A key spell of 3-18 from Marple's Ed Saxelby halted their progress however and in dismissing set batsman Tom Foreman (26 from 19) left the lower order requiring 12 from the final over which proved to be 8 too many despite the best efforts of Dan Fesmer who struck 8 from 5 balls in a tense finale. Marple proceed to the T20 finals day where will face Bramhall with Nantwich and Neston drawn in the other semi-final.

In the league fixture on Saturday Alderley's 2nd XI completed a 9 wicket rout of Macclesfield at Moss Lane. Winning the toss and bowling first the Alderley attack shared the wickets evenly in shooting out Macclesfield for just 115 in 39 overs. Number 4 Jack Massey was the only visiting batsman to offer any sustained resistance with 34 as stand-in skipper David Johnson claimed 3-14 and James Bateman, Mark Hutchinson and Katie Haszeldine each helped themselves to two wickets apiece. Alderley's chase was completed in the 16th over as David Wright blasted 81 from only 45 balls, falling just prior to the winning post in an emphatic performance.

On Sunday Alderley's 3rd team completed a clean sweep for the weekend with a comprehensive win over Hyde by 8 wickets at Moss Lane. Asked to bowl first by Hyde the home attack struck regularly to restrict the visitors to 129, bowled all out in the 34th over. Siddant Kumar and Alex Murty claimed 3 wickets each for Alderley, captain Harry Elms taking 2 with Hyde's number 8 Charlie Hewitt top scoring with 27 from just 11 balls, captain Michael Ainger contributing 25. An unbeaten 50 from opener Henry Stevinson saw Alderley home in quick time, combining with fellow opener Will Valentine (25) and then number 3 Arya Armaan (30) to guide the hosts to their target in the 25th over.