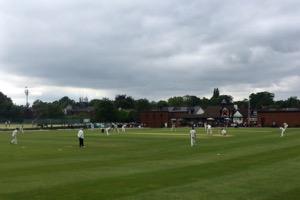 Alderley Edge 1st XI continue to improve from their sluggish beginning to the season with four wins from four across all competitions after completing a comprehensive 160 run victory over Oulton Park on Saturday in Cheshire County League action.

After winning the toss captain Adam Worrall decided to bat first at Moss Lane and after the early loss of Alan Day, Calum Rowe and Danny Lamb picked up where they left off from the previous weekend in adding 79 for the second wicket before Lamb departed for 43.

Rowe combined with Ed Fluck (27) and Worrall (28) to take the score beyond 200 before being the fifth wicket to fall, dismissed for a superb 91. Jonny Scurrah continued his recent good form with the bat from number 6, falling one short of a half century off just 36 balls and with the help of the lower order pushed Alderley up to a total of 274-8 from their 55 overs. Craig Douglas was the pick of the visitors attack with 3-89.

In response only three Oulton Park batsmen made it into double figures as they were blown away by exceptional bowling from Danny Lamb who claimed 7-49. Opener Muhammad Bashir showed most resistance for the visitors with 38 but following his dismissal on 72-5 the last 5 wickets fell for the addition of just 42 more runs.

Matt Jamieson hit 25 from number 6 as Outlon Park were dismissed for 114 in 28 overs as Alderley claimed a 25-3 points victory, Charlie Reid taking 3-35 in another solid outing with the ball for the home side.

In the reverse fixture Jon Usher's 2nd XI were on the receiving end of a 130 run win for the hosts. Alderley began brightly in reducing Outlon Park to 2-1 in the opening stages but a 142 run second wicket partnership between Jonathon and Ben Kettle took the game away from the visitors.

Alderley rallied midway through the innings and when Jonathan Kettle was dismissed for 84 at 164-5 the hosts had lost 3 middle order wickets for 20 runs. Oulton Park's captain Mark Johnson led a fightback from number 7 hitting 49 not out adding 77 with number 6 Owen Williamson to allow the home side to finish their innings on a high closing on an imposing 275-7. James Bateman was the stand out from the Alderley attack claiming 3-46.

Richard Smith's 6-45 for Oulton Park in the second innings prevented the visitors from building any momentum with the bat after reaching 55-2 in the early stages of the chase. Ollie Hall and Adam Condliffe contributed 35 apiece from numbers 3 and 5 respectively but regular strikes with the ball from Smith, along with Owen Williamson's 3-34, meant Alderley were always behind the pace, eventually dismissed for 145 in the 35th over.

On Sunday Alderley's 3rd XI drew with Stockport with both sides in with a chance of victory until the final overs. Winning the toss and bowling first Alderley recovered well after strong early order contributions for the home side boosted them to 158-4, captain Nasib Ullah the chief contributor with 91.

Three wickets each for George Valentine and Alex Murty squeezed Stockport's middle and lower order restricting them to a further 60 runs with the hosts closing on 218-9 from their 45 overs.

Arya Armaan's 40 runs from number 3 set Alderley off strongly in the second innings but at 86-5 the game was in the balance. Mike Higginson and Siddant Kumar played positively from numbers 7 and 8 to keep the visitors in with a sniff of victory but with Kumar dismissed on 29 Higginson batted out for an unbeaten 61 to ensure Alderley claimed a share of the points closing on 202-9. Stockport's captain Ullah completed a good all round day with 3-37 with the ball.

On Thursday evening Alderley's first team progressed to the quarter final stage of the T20 competition with victory over Timperley at Moss Lane. Winning the toss and batting first, the visitors recovered from 7-1 to 72-3 on the back of Nathan Olivier's 46 from 26 balls.

Tom Foreman (2-25) removed Olivier and from there Alderley's bowlers were in the ascendancy sweeping the remaining 7 wickets aside for 44 runs, only Abhishek Kulkarni resisted with an unbeaten 24. Jonny Scurrah took the final 4 wickets to fall finishing with 4-17 closing out Timperley's innings 2 overs short of their full 20 with the scoreboard on 116. Richard Wilkinson capped a fine all-round display with three catches in the outfield to go with his 2-24 with the ball.

Alderley did not have things all their own way in response but a quick fire 46 not out from captain Adam Worrall, continuing to open the batting in the T20 competition, took the home side to their target with over 3 overs to spare. Charlie Reid hit 16 not out from 11 balls to help complete victory for the hosts by 4 wickets with Ed Galley and Chris Page both taking two wickets apiece for Timperley. Alderley now progress to face Marple on the 27th June with a place at the Cheshire T20 finals day at stake.