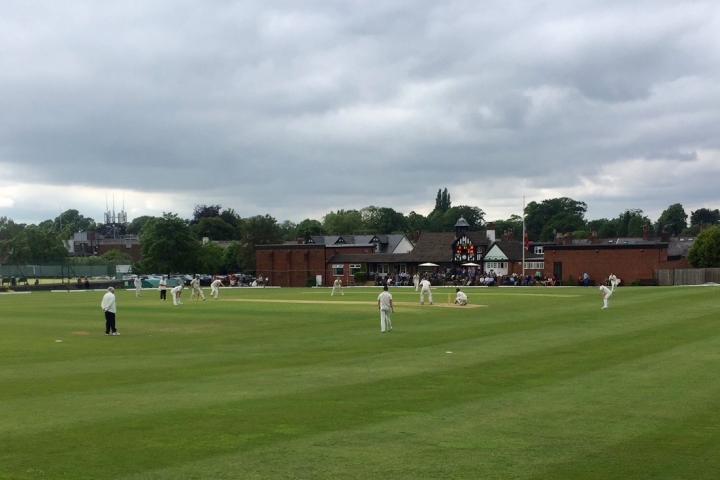 Alderley skipper Adam Worrall won the toss and elected to bowl first in muggy conditions, openers Richard Wilkinson and Keiran Elliott both striking early to leave the visitors scoreboard at 1 for 2. Bramhall's Australian overseas Liam Banthorpe and captain Nick Cantello set about repairing the innings with a watchful stand of 69 for the third wicket. Alderley's seamers hit back to remove Cantello and the dangerous Iftikhar Naseer before Banthorpe was the fifth Bramhall wicket to fall, dismissed for 96 with the score on 148-5. Worrall juggled his bowlers in containing the Bramhall lower order, restricting them to 191-8 from their 55 overs. Andrew Windle led the home side with 3-43, Richard Wilkinson 2-47 from a 17 over stint (including 6 maidens) and Charlie Reid unlucky to claim only 1 wicket from a tidy 12 over spell.

Things started badly for the home side in the second innings, losing opener Calum Rowe before a run had been scored. Alan Day and Danny Lamb, playing against his former side, rebuilt under sustained pressure from Bramhall's opening pair of Ashley West and Simon Wilkinson. Wilkinson claimed both their wickets with the score on 61 just as the pair looked to have broken the shackles of the early overs, Lamb departing for 31 and Day for 30. Alderley's middle order woes continued, losing a further 3 wickets for just 17 runs to slump to 78-6 in what proved to be the crucial period of the match. Richard Wilkinson and Sam Perry showed plenty of character in adding 38 for the 7th wicket to keep Alderley in the game with the required runs per over rate climbing. Enter Charlie Reid, batting at number 9, who hammered a swashbuckling 49 not out from 42 balls. His efforts, along with number 10 Keiran Elliott (16 from 11 balls) looked to be clawing back victory for the hosts but with 9 runs required off the final over some cool-headed bowling from Naseer meant Alderley couldn't quite reach their target closing on 188-8 taking 6 points to Bramhall's 12, Ryan Macciocchi finishing with 3-29 and Simon Wilkinson 3-45 for the visitors.

Alderley's Second XI gained the better of a draw at Hyde in their fixture, the visitors winning the toss and bowling first. Opener Emma Lamb top scored for the visitors with 69 sharing partnerships of 49 for the first wicket with Joey Chong and 84 for the second wicket with Ollie Wildig. Wildig's 66, and solid contributions from brother Adam (25) and captain Jonny Usher (26) saw all Alderley's top 6 register double-figure scores propelling the team to a total of 261-9 from their 50 overs. Phillip Balderson claimed 5-66 from 15 overs for the home side.

Tom Foreman quickly reduced the home side to 21-2 in the second innings as Alderley started brightly with the ball. Hyde's veteran opener Dave Leighton registered 109 and combined with Ben Balderson (47) in adding 140 for the third wicket but the slow pace of the reply left Hyde with little chance of overhauling Alderley's total eventually closing 80 runs adrift of the victory target on 182-5. Foreman finished with 4-45 for the visitors with Alderley taking 13 points from the day to Hyde's 8.

On Sunday Alderley's Third XI continued their recent good form with a convincing victory over Marple at Moss Lane. Winning the toss, skipper Harry Elms invited the away side to bat first. Only Marple's number 4 Sam Stretton was able to counter the Alderley attack for any length of time scoring 25 before becoming one of 4 victims for Elms (4-25) who combined with George Valentine (4-27) to sweep Marple aside in 27 overs. Things could have been even bleaker for the visitors whose last two partnerships carried them from 70-8 to their final total of 111 all out. Opener Ben Lambert continued his recent form with a destructive 61, including nine 4's and two 6's, to bolster Alderley's reply. With Lambert falling at 76-4, Elms ensured there would be no slip-up with a rapid-fire 27 not out from 25 balls to seal a 5 wicket victory and a maximum 25 points for the hosts, Marple's Jacob Comey claiming 3-33 in a losing cause.