Cricket: Alderley blown away at Marple 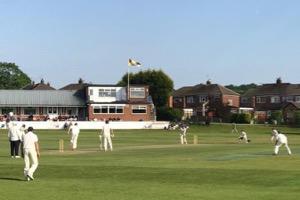 Alderley Edge First XI find themselves at the wrong end of the Cheshire Premier League table currently after another under par performance in a season where they have yet to hit their straps.

Winning the toss Adam Worrall elected to bowl first on a sunny but blustery day at Marple's Bowdon Lane ground. Marple opening batsman James Morgan held the home side's innings together with a patient 67 from 122 balls with a regular flow of partners accompanying him at the other end. A combination of committed fielding and Alderley's seamers, restricted scoring opportunities for the home side in the early part of the innings leaving them at 87-5, the pressure resulting in the run out of key man, former Cheshire skipper, Andrew Hall without scoring.

At 123-7 Alderley were sensing the opportunity to chase a relatively low score but a late rally from number 8 Ed Saxelby (19 runs) and number 10 Jack Grundy (24 runs) pushed Marple's total up to a trickier 174. Andrew Windle was rewarded with 3-57 from 17 uninterrupted overs, Keiran Elliott 3-45 and Charlie Reid 2-16 from 9 economical overs.

Alderley began brightly in their run chase notching up 54 before losing Calum Rowe for 30. Fellow opener Alan Day continued on to register 51 before becoming the first victim to fall in a sensational spell of bowling from home skipper Paul Wood. Introducing himself as the 5th bowler Marple used, Wood finished with 7-38 from ten chaotic overs to send the visitors crashing from a comfortable 123-2 to 164 all out, the final 5 wickets falling for just 16 runs with Alderley's number 6 Reid left stranded on 12 not out after weathering the storm but running out of partners to complete the chase with. The result leaves Alderley just a point above the two relegation places ahead of the visit of Bramhall this Saturday.

Jon Usher's second XI fared better in the reverse fixture at Moss Lane, leading an inexperienced team to an impressive 6 wicket win. Winning the toss and electing to bowl first, Alderley's opening attack of Dan Fesmer (4-43) and Sid Kumar (2-14) ran through Marple's batting to dismiss them within 38 overs for 103. Andy Massey and Sam Stretton were joint top scorers for the visitors, both registering 14. The home side cruised to victory inside 24 overs on the back of opener Ollie Pooler's 61, Joey Chong providing good support with a knock of 25 for the Moss Lane side to register a 25 points to 1 victory.

On Sunday, Alderley's third team completed the weekend by registered a crushing victory over Oxton at Moss Lane, the home side running out victors by 123 runs. Batting first, Alderley's line-up posted consistently sizeable partnerships, opener Matthew Cheetham posting 35, Will Valentine 65 from number 3, and some big hitting from number 5 Ben Lambert to allow captain Harry Elms to declare early in the first innings with the home side on 227-5. Oxton's batting proved no match for the home attack in the second innings, only opener Jon Bennett making a notable contribution with a score of 21, as the visitors were routed for 104. Elms claimed 4-22, George Valentine 2-26 and Katie Haszeldine 2-2 from 5 overs, 4 of which were maidens.