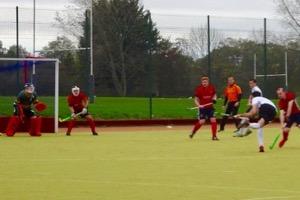 AEHC Mens 1st XI made their way over to the Wirral for a mid-afternoon clash with Oxton 1s Saturday in the North Premier League eager to collect all three points to stay in league contention. It was a case of mission accomplished, Edge's 3-1 win consolidating their position in the top half of the table.

The game started with both sides enjoying spells of possession but it was Edge who broke the deadlock when Warburton's shot on goal was deflected in by one of Oxton's players.

The hosts then came back into the game but were regularly thwarted by Edge's defence, particularly goal keeper Sean Hadfield who made a string of fantastic saves to keep the score at 1-0 for some time.

Edge doubled their lead just before half time when McCormick powered a shot past Oxton's keeper. The second half began in a similar fashion with both sides creating chances and Hadfield again being forced to make some influential saves.

Oxton did manage to get a goal back from a short corner before Edge sealed the win after Billy Headley latched onto a loose ball before it was ultimately bundled into the goal by Parker.

The Men take on Formby away next weekend it what is set to be an influential match as Formby currently sit one place and one point ahead of Edge in the league.

The Ladies 1s were the club's only Ladies team in action this weekend. They hosted Kirkby Stephen in the North Prem and earned themselves three points from a 3 -1 win in what was a feisty and physical game.

Edge didn't play their normal passing game in the first half and allowed Kirkby Stephen to dictate the tempo, although the game remained goalless going into the half time break. Edge came alive in the second half, the catalyst being when Sarah Hopkin took a run down the middle and passed to a sprinting Issy Reynolds-Duffy. After a goal mouth scramble, Amanda Bennison was able to open the scoring.

Nic Hall then hit a rebound from the opposition's goal keeper into the bottom right of the goal three minutes later. Kirkby Stephen replied from a short corner only for Lexi Archer to keep her cool and sink a penalty strike given after Liv Moores was taken out by the goalie. The Ladies will be hoping for another three points next weekend when they host struggling Kendal 1s.

The Mens 2s put in their most complete performance of the season so far, putting bottom of the league Oxton 2s to the sword from the off in their North League division 2 clash. Charles Barnes dominated the midfield for Edge, feeding the ball forward time and again.

Oxton held out with a packed defence until the 14th minute when Edge took the lead from a penalty corner dispatched by Chris Hardy. Jack Smith added another before half time, finishing off a good flowing move. Man of the Match Ed Fluck grabbed the third and Barnes added a penalty corner for number four. Other opportunities came and went, including a disallowed goal from Edge, before Fluck struck again to make the final score 5-0.

The Mens 3s also enjoyed a win in North West division 3, defeating Timperley 3s 3-0.  Edge took the lead early in the first half when Man of The Match Adam Allmand-Smith controlled a wayward short corner injection and deposited the ball in the top left hand corner. Ethan Hadfield scored the second goal and Chris Ashton a well-deserved third to seal the three points although Timperley's keeper was kept on his toes throughout. The Men return to the same pitch next Saturday to take top-of-the-table Timperley 2s. However, if Edge win they will take that position – no pressure then!

The 4s held Bebington 2s, a team a couple of places higher than them in North West division 4, to a 3-3 draw, showing commitment and determination to come back from finding themselves 0-2 down early on.

The all-girl Beavers B team were on fine form, beating Northop Hall 7 – 1 at Kings Macc, four of those goals coming from Izzy Broadbent. The Beavers C had a much harder fought game against a well-drilled Preston team which comprised both boys and girls. The final score was 2-0 to Preston.