Cricket: Alderley beat Toft to stay in the hunt 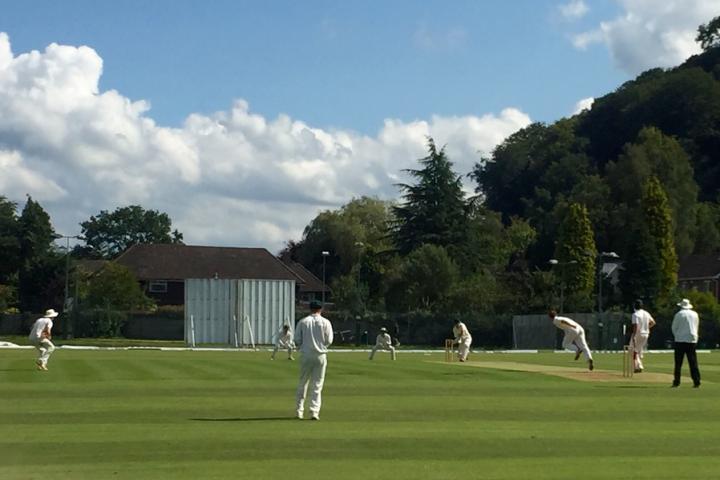 With two games remaining of the ECB Cheshire Premier League season, Alderley Edge First XI kept themselves in outside contention to retain their title with a convincing win over neighbours Toft at Moss Lane on Saturday.

Winning the toss, Captain Adam Worrall backed his under fire batting line up in opting to bat first on a sunny afternoon. Openers Calum Rowe and Alan Day set about the Toft attack positively, racing to 56 in a little over ten overs. Both departed soon after, Rowe for a rapid-fire 41 off 35 balls, along with middle order pair Sam Perry and Ed Fluck to leave Alderley on the back foot at 75-4, ex-Alderley left-armer James Scott doing the damage for the visitors with 3 quick wickets. Batting at number 6, Worrall added partnerships of 83 with Khalid Sawas (69 from 60 balls) and 57 with Jonny Scurrah (28 from 23 balls) to rebuild the innings. The strangely late introduction of Lancashire star Rob Jones into the attack from Toft claimed Worrall for a very well made 93 and Scurrah, notably after two straight sixes off Jones' bowling, the Alderley innings closing on a healthy 277 all out from just short of 53 overs.

In response the visitors were never allowed to get out of first gear with wickets falling in the opening overs to leave Toft at 33-3. With the away side reeling, Worrall gave Jonny Scurrah his debut opportunity with the ball in Alderley's First XI, and he did not disappoint returning figures of 5-28 from 9 overs to rip the heart out of the Toft order. Throughout the carnage Jones, batting at number 3, had provided stout resistance and got the better of a few close umpiring decisions to stand between the hosts and victory. Batting with number 11 Jimmy Lomas, Jones launched an all-out assault on the Alderley bowlers with the full range of shots on display straight out of the Twenty20 manual. Plundering 69 in a little over 5 overs, Jones passed his century and Alderley nerves began to twinge until he was well held on the cover boundary by Sam Perry off Charlie Reid for a superb 141 off 116 balls giving Alderley victory.

In the reverse fixture Alderley's Second XI fared worse against league leaders Toft on their home turf. Winning the toss and batting first Alderley could only muster a total of 96 in the face of an experienced attack. Opener Ollie Hall fared best with 28, Joe Stanley recording the impressive figures of 5-13 off 10 overs (including 4 maidens) for the hosts. Alderley made some early inroads after tea with Harry Elms taking 4-36 to have the home side at 28-3 at one point but a composed 42 not out from Ewan Williams guided Toft to their target inside 23 overs to win by 6 wickets.

On Sunday, Chris Smith's Third XI brought their season to a close with an exciting game against Cheadle Hulme at Moss Lane. Asked to bat first, Alderley openers Henry Stevinson and George Bell delighted the watching Alderey supporters with a record 1st wicket partnership of 236 in quick time. Bell was positive throughout and able to register his maiden century In senior cricket finishing unbeaten on 111. Stevinson was equally dominant but was unfortunate to be dismissed for a well made 96, at which point the Alderley declaration came.

Despite an early breakthrough from Rhys Mallard the visitors added over a hundred for the second wicket to give them a good start. However, a tight spell from Bell (3-44) pegged them back and when the dangerous James Davidson struck (2-18) it seemed Alderley were on track for victory. Unfortunately, Cheadle Hulme's number 11 dashed the home side's hopes with some lusty blows meaning the visitors ended victorious by a margin of just one wicket. The result left the Third XI a creditable third place in their division, no mean feat with a youthful team after losing the first four fixtures.