Cricket: Rain claims top of the table clash with Chester 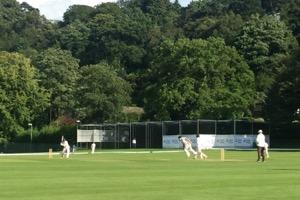 The British summer rain proved to be the winner at Moss Lane on Saturday claiming the top of the table clash between Alderley Edge First XI and Chester Boughton Hall without a ball bowled. With Nantwich able to escape the showers via playing further south in the county and recording a win they hopped over Alderley to put themselves into second place and right into the mix for the Cheshire ECB Premier League title. An intriguing 4 games remain for Adam Worrall's side to defend their championship with the short trip to Cheadle next up on Saturday.

Clearer weather at Chester's Filkins Lane ground allowed Alderley's Second XI a 40 overs per side game under the stewardship of stand-in captain Dan Fesmer. Winning the toss and electing to bowl first experienced Chester opener Matthew Griffiths posted 50 to frustrate the Alderley attack as the home side built a solid platform. Mark Warnes introduction slowed the host's progress, claiming 2-40, but a quickfire 85 not out from Chester's number 5 Alex Townend pushed their total to 217-5 leaving Alderley with a tricky chase in the second half.

Veterans Mark Currie and Adam Wildig began positively at the start of the second innings to set Alderley on their way, the scoring rate picking up when Currie was joined by number 4 Ollie Wildig who contributed 35. Although keeping pace with the required rate through the majority of the innings, Alderley lost a flurry of middle order wickets which slowed their progress leaving the visitors a frustrating 12 runs short of their target. Currie posted a superb 90 for Alderley who registered a draw with the side immediately above them in the table, Sam Mallows taking 3-53 for the home side.

Alderley's Third XI season continued its up and down theme against Marple on Sunday. Asked to bat first, all the Alderley batsmen got starts but only George Bell (35) went on to make a significant contribution with the home side dismissed for 168. Even so, this seemed a defendable total, particularly after Will Chalk removed the first 3 Marple batsmen cheaply. However, some lacklustre bowling and mediocre fielding after a tight opening to the second innings allowed the visitors to work their way back into the contest and Alderley found themselves at, what an hour earlier had seemed, an unlikely defeat. Bell picked up 3 wickets near the end to keep the home side in the hunt but Marple reached their target with 3 wickets in hand with Chris Smith's side left to wonder what might have been.