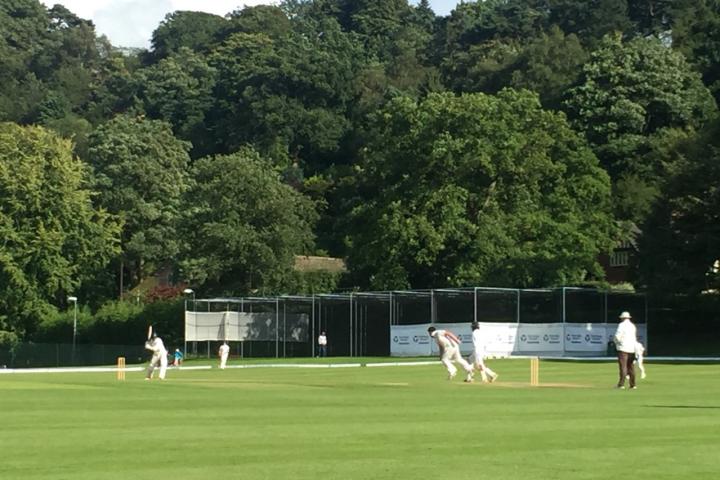 Returning skipper Adam Worrall won the toss and elected to bowl first, the Alderley attack making early inroads to the opposition order in reducing them to 34-2. Several Bowden batsmen made it to double figures but could not kick on to a meaningful score with tight bowling and committed fielding from Alderley keeping the pressure on the opposition.

When visiting captain Simon Marshall was dismissed for 25 hitting a steepling catch that was well taken by Calum Rowe at midwicket, Bowden found themselves at 83-5 with the bulk of their batting firepower accounted for. Patrick Ashling added 28 from number 5 and marshalled a youthful Bowden tail-end well to move the score to 128-7, his brother Chris picking up the baton to push the visitors total on to 147 all out from just short of 53 overs. Alderley's Australian paceman Hamish Winter-Irving again led the bowling with 6-28, Andrew Windle supporting well with 2-35.

Alderley began their reply in sunny conditions and after a couple of early setbacks looked in control of the chase at 52-2 with Calum Rowe and Sam Perry at the crease. With the dismissal of Rowe for 31 Bowdon's spinners began to turn the screw on a pitch now offering them some assistance and Perry followed soon after for 27 to leave Alderley at 78-5 but with their long batting line up, still plenty of batting remaining to finish the job.

Skipper Adam Worrall, batting at number 6, contributed 25 which took Alderley past the 100 run mark but the regular loss of wickets to a mixture of poor shots and poor running left Alderley 20 runs short of their target closing on 127 all out. Bowden's spin combination of Alec Makin and Suktan Raja, and seamer Chris Ashling all contributing 2 wickets apiece.

The win gave Bowdon a boost in their bid to survive relegation from the ECB Cheshire Premier League and dealt Alderley a double blow with leaders Chester having lost themselves earlier in the day. Next Saturday sees a key game in the final run-in with second-placed Alderley hosting leaders Chester at Moss Lane.

Jon Usher's Second XI continued their recent good form with a comprehensive win at Marple. Winning the toss and choosing to bowl first, new ball pairing of James Bateman and Jonny Scurrah quickly accounted for Marple's top 4 with 2 wickets apiece, leaving the hosts reeling on 39-4 with top scorer Andrew Massey (26) back in the pavilion. The introduction of Ashray Bhamidipati continued the tumble of wickets, the young spinner claiming 4-40 from ten excellent overs as Marple were bowled out for 93 inside 38 overs. Veteran Mark Warnes completed an outstanding all-round display from Alderley's attack with the figures of 2 wickets for 4 runs from 8 overs which included 5 maidens.

At 21-2 Alderley's chase began to look more problematic than first imagined but a 57 run partnership between Jonny Scurrah (23 not out) and Ollie Wildig (34) for the third wicket broke the back of the run chase, Scurrah completing the job with Usher to bring Alderley home for the loss of 4 wickets.

On Sunday, Alderley's Third XI travelled to Didsbury where they were asked to bat first. Solid contributions throughout the Alderley line-up took them to a total of 198-4, 52 not out from Joey Chong and 49 from Ed Pitt the stand out performances. Didsbury lost 2 early wickets to Sid Kummar to immediately put their chase on the back foot but their need for victory ensured they pressed on despite tight Alderley bowling, in particular from Ashray Bhamidipati (2-41). However, it was the sensational return of Kumar to the attack who took a further 5 wickets in a 23 ball spell to bowl out the hosts 43 runs short of their target. Kumar finished with an outstanding 7-23 for Chris Smith's side who remain in second place in the league.