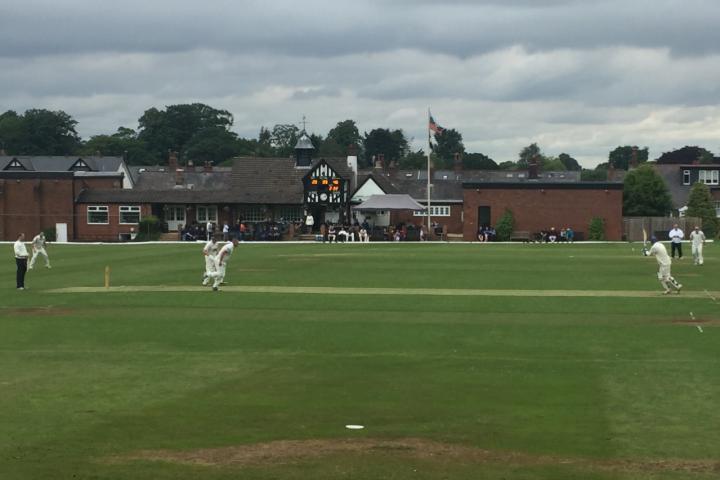 After the disappointment of exiting the league Twenty20 competition by 6 wickets on Thursday evening at Hyde, Alderley Edge CC's First XI tasted defeat to the same opponents in the ECB Cheshire Premier League at Moss Lane 48 hours later.

After losing the toss Adam Worrall's men were asked to bat on a greenish pitch, Hyde's attack taking full advantage of the helpful conditions to restrict Alderley to 35-2. Alan Day (49) and Richard Wilkinson (20) toiled against the movement Hyde's seamers were exploiting to add 56 for the 3rd wicket. This was to prove to be the high point of the hosts' innings as their final 7 wickets fell for the addition of just 29 runs. Former Alderley man Jason Whittaker grabbed 4-45 with Daniel Cranmer taking 3 wickets for just 4 runs as the home side were routed for 120.

With Alderley bowled out in only 36.2 overs Hyde had 73 overs left to chase the 121 needed for victory. The home side claimed a big scalp in the opening overs with visiting skipper Danny Berry dismissed to leave Hyde 5-1 at the beginning of their reply. But fellow opener David Fitzsimmons' watchful 76 took the visitors to within 12 of their target before becoming one of two wickets to fall to Hamish Winter-Irving (2-43). The result left Alderley still top of the league but with their lead now trimmed to 9 points ahead of next week's visit to Neston.

Alderley's Second XI also suffered defeat in the reverse fixture. Having won the toss and elected to bowl first, Jon Usher's side were unable to capitalise on some early success with the hosts looking vulnerable at 78-3. Things could have been even better for the visitors with Hyde's opener Lewis Reeves dropped on 18 going on to make 105. This combined with some handy contributions from Hyde's lower middle-order propelled them to 242-9 from their 50 overs. Oliver Towle was the stand-out from the Alderley attack claiming 4-70 in two tidy spells.

The visitors' reply started brightly reaching 93-2 with Jonny Scurrah registering 54 opening the batting. Despite several contributions in the 20s and 30s through Alderley's innings the regular loss of wickets curtailed their scoring to fall 23 runs short in the 43rd over. James Chew was chiefly responsible in taking 6-74 for the home side.

A disappointing weekend for Alderley was completed on Sunday with Chris Smith's 3rd XI beaten by 6 wickets at home to Grappenhall. After losing the toss and being asked to bat, the hosts were bundled out for just 92 inside 25 overs, number 10 Laurence Tissington showing some resistance in top-scoring with 28. It took Grappenhall just 22 overs to accumulate the runs required for victory, Alderley claiming 4 wickets in the second innings.