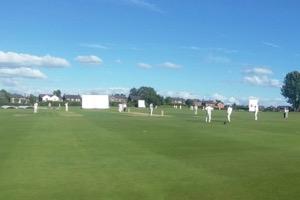 Winning the toss, skipper Adam Worrall elected to bowl first, the successful Alderley seam attack were quick out of the blocks in reducing Chester's strong top order to 82-5.

Hamish Winter-Irving and Tom Foreman once again doing the damage with the new ball. However a brilliant fight back from Chester's middle order was to swing the game in favour of the hosts. Cheshire captain Lee Dixon (112) and Ollie Law (59) put on a stand of 144 for the sixth wicket, helping the home side to 251-9 off their allotted 55 overs. Winter Irving (3-55), Richard Wilkinson (3-75) and Foreman (2-75) were the stand-outs from Alderley's attack.

In reply Alderley were immediately in trouble at 16-2, a position from which they never fully recovered. Khalid Sawas continued his good form with the bat in compiling 78 but in regularly losing partners no match-winning combination emerged to emulate the Chester innings.

Tom Foreman contributed 21 from number 8 but Alderley fell well short of the required target, eventually succumbing in the 44th over by 99 runs. Cheshire spinner Jack Williams claimed 6-48 from 16 overs for Chester.

Alderley's Second XI also suffered defeat to the same opposition on Saturday at Moss Lane, after losing the toss Jon Usher's men were asked to bat first and responded well reaching 90-1 on the back of solid contributions from the two Ollie's - Hall (46) and Pooler (33).

Alderley struggled to build momentum after a good start with all the middle order getting in but nobody registering a telling score, the home side's innings closing on 184 all out in the final over with Jon Scurrah unbeaten on 23, Robin Fisher taking 4-34 for the visitors.

An opening stand of 43 put Chester on their way to victory with Wicketkeeper Joe Killoran (63 not out) and Alex Townend (69 not out) completing a comfortable chase for the visitors for the loss of 3 wickets, young Ashray Bhamidipati striking twice for the home side.

The 3rd XI completed the weekend's fixtures with a trip to Bramhall. Bowling well and taking early wickets, Alderley were in control of the game until a downpour changed the momentum of the match.

When play resumed the Alderley bowlers struggled to control the wet ball which Bramhall took advantage of to post a score in excess of 200 which could have been more but for two excellent spells from Sid Kumar who registered his maiden five wicket haul in senior cricket. Alderley failed to make a serious challenge to the home side's total after tea but strong performances from Cheetam and Chalk enabled Alderley to register a hard-fought draw.