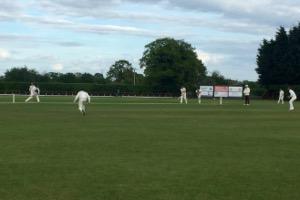 Alderley Edge CC 1st XI came through a potentially tricky fixture away at Nantwich with a convincing 6 wickets win from what was their stiffest test of the season so far.

The win cemented their 100% start to the season collecting maximum points from each of their opening 4 fixtures in the Cheshire County Premier League.

Winning the toss, Captain Adam Worrall elected to bowl first on a fairly benign surface at Whitehouse Lane, Australian Hamish Winter-Irving continuing his red-hot form with the ball in reducing the hosts to 33-2.

A Nantwich counter attack for the third wicket put Alderley on the back foot with Luke Robinson targeting the short straight boundaries to good effect in compiling 79 off 74 balls to take the hosts to 125-3.

A good low catch from Calum Rowe at short mid-wicket to dismiss Robinson changed the momentum of the innings though with Alderley gaining a greater foothold in the game and taking wickets at regular intervals. Nantwich's number four Ryan Brown played fluently to register 74, but with wickets falling around him he became the ninth wicket to fall on 198.

Nantwich eventually being dismissed for 205 when a score of 260 plus looked well within reach. Winter-Irving bowled with good pace and control to collect 5-41, Charlie Reid contributing 3-62.

Alderley faced up to an attack comprising ex-Leicestershire paceman Ollie Freckingham and former Cheshire stalwart James Warrington, so chasing a 200+ score was a challenge not to be underestimated.

After Freckingham had trapped Rowe lbw to leave Alderley 14-1, Alan Day and Khalid Sawas went on the attack. Day was particularly harsh on the opposition spinners hammering eleven 4s in his 53, departing on 107-2. Sawas then lost his next two partners for the addition of only 23 runs to put the visitors in trouble but forged a match-winning partnership with young all-rounder Tom Foreman, both showing superb concentration and shot selection under pressure in adding a partnership of 76 to seal the game for Alderley. Sawas finished just short of a well-deserved century on 97 not out, Foreman adding a determined 33 not out.

Alderley's 2nd XI earned a losing draw in the reverse fixture at Moss Lane. Winning the toss, skipper Jon Usher asked the opposition to bat first. Nantwich responded with a total of 248-4, declaring off 48 overs. This proved to be too much for a youthful Alderley side, resistance coming mainly in the form of veterans Mark Currie (44), Usher (43 not out) and number 11 Mark Warnes who kept Nantwich at bay for 60 deliveries in notching 11 not out. Alderley closed on 178-9, avoiding defeat by the narrowest of margins.

The 3rd XI were asked to bat at Sale in their fixture on Sunday, reaching 176 - 5 off their 50 overs. Alderley's score owed much to a fine debut knock of 73 not out by George Bell, aided by more than a few lusty blows from the evergreen Andy Towle who added 39. Alderley bowled well throughout, but were hampered by a wet ball, Sale closing out a tight game by hitting the winning runs in the final over. Harry Elms was the pick of the Alderley attack with 2-46.