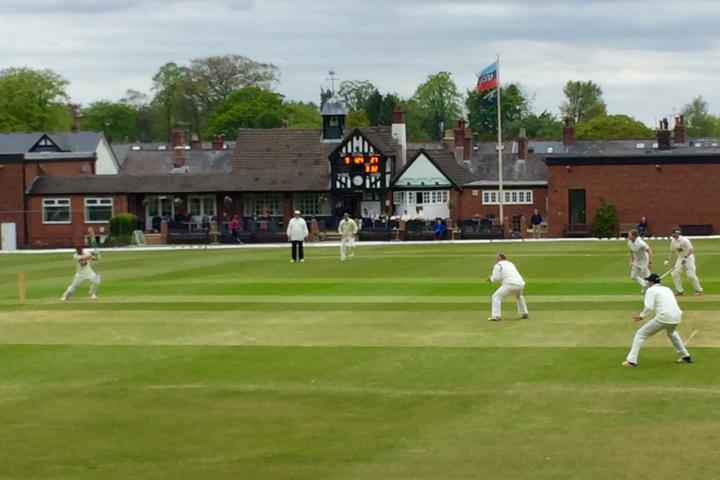 Alderley Edge First XI maintained their 100% start to the season with a resounding win over neighbours Bramhall at the weekend.

After losing the toss Alderley were asked to bat first under leaden skies at Moss Lane, steadily making their way to 110-3, mainly on the back of a fluent 60 from opener Calum Rowe.

Alderley began the second innings brightly with the ball, claiming Bramhall's first two wickets before a run had been scored, Hamish Winter-Irving and Tom Foreman again doing the damage up front.

After some lusty hitting from dangerman Iftikhar Naseer took Bramhall over the 50 run mark, his dismissal to a good catch in the deep by Wilkinson initiated a slump in the visitors order from which they never recovered falling from 54-4 to 87-7.

Stout resistance in the form of Bramhall's captain Nick Cantello kept Alderley at bay into the 45th over before he ran out of partners, stranded on a defiant 49 not out. Andrew Windle picked up 3-31 for Alderley with Wilkinson, Winter-Irving and Foreman all claiming 2 wickets apiece as the hosts ran out winners by 76 runs.

Alderley's Second XI included 5 new players in their team for the trip to Macclesfield where, having lost the toss, they were asked to bat first.

The early signs were good for the visitors as Adam Wildig dispatched the first ball of the innings for six over square leg, but despite good contributions from Wildig (34 runs), Johnson (36) and Usher (32), no batsman went on to register a significant score which led to an under par 162 all out, estimated to be around 40 runs short of a competitive total.

Alderley's bowlers fought hard in the second innings, at one stage pinning the hosts back to 50 for 2. Again, Alderley's fielding let them down however, and could have made the game closer but 2 dropped catches, 2 catches taken off no balls and 1 stumping off a no ball all proved to be costly given the low score posted. Chris Cook 2-44 and Mark Warnes 2-47 as Macclesfield reached their target in 43 overs for the loss of 6 wickets.

The 3rd XI travelled to Didsbury to meet last years' League Champions and performed well after being asked to bat, with contributions throughout the order in particular solid 40s from Harry Elms and Ollie Towle helping Alderley to a total of 192.

A poor first hour with the ball gave Didsbury a momentum which, aided by a number of uncharacteristic fielding lapses by Alderley allowed the home side to reach their target with 6 wickets down and more than nine overs to spare.