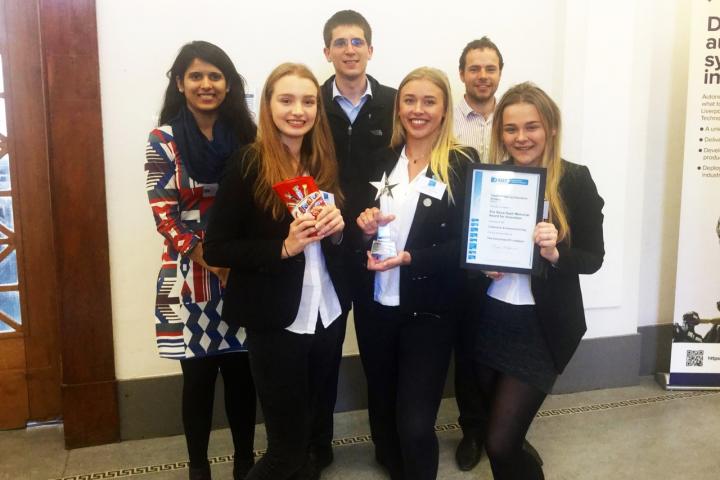 Lower Sixth Engineering team at Alderley Edge School for Girls visited the University of Liverpool for the Engineering Education Scheme Celebration and Assessment Day. This was the final stage of the six month project they have been working on. The girls have been working on a playground clock and traffic light system that will be installed in one of the playgrounds at Lancasterian Specialist School in West Didsbury.

In the morning, alongside eighteen other engineering teams, they were required to give a 15 minute presentation to a panel of 8 senior engineers who were assessing their project and they also had to complete a 10 minute question and answer session.

The girls at AESG spoke about their project with great enthusiasm and impressed the judges in all aspects of the assessment. For the remainder of the morning they explained their project to visitors to their display stand including the other engineering teams and mentors.

The afternoon session involved speaking to invited guests, including parents so they could see the results of their hard work, and the graduation ceremony where awards were given out. The team were in shock when they were announced as winners of the "Steve Nash Memorial Award for Innovation".

The clock will be used by the children to recognise when it is time to tidy up and line up at the appropriate times during a break. Due to the physical and learning difficulties of the children the clock needed to be multi-sensory in order for them to access the information. The design the team created was a cartoon lion with a friendly face and included push buttons that allow the students to interact with it.

Miss Johnson, Assistant Head of Sixth Form and Teacher of Maths at AESG said it was a fantastic day: "I am extremely proud of the girls and the enthusiasm they showed. They thoroughly deserved the award as their clock design is a massive success and wowed everyone throughout the day."

The team consisting of Jess A, Bianca B and Nina F now plan on entering their project into the regional round of the Big Bang Competition in July so fingers crossed for further success!