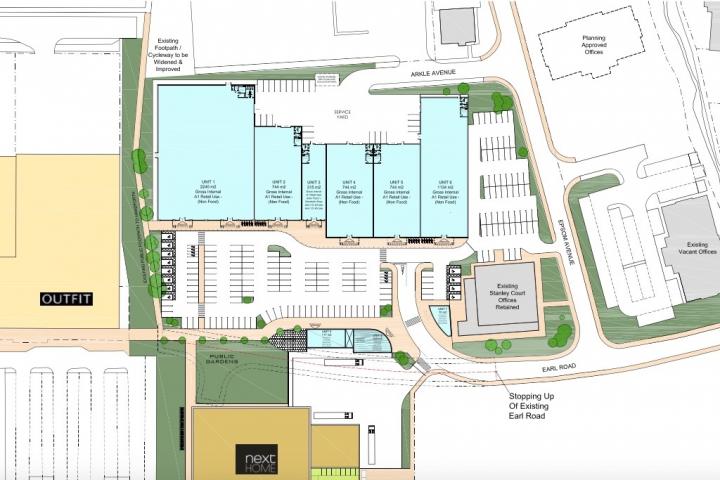 Plans for a new retail development adjacent to the existing Handforth Dean retail park are due to be determined next week.

Members of the Strategic Planning Committee will decide whether Orbit Developments can go ahead with their proposal to demolish the existing warehouses at the junction of Earl Road and Epsom Avenue in Handforth and replace them with a parade of six units and a standalone single storey unit. The adjacent offices are to be retained.

The scheme includes five unit for non-food retail purposes and two units are to be used for non-food retail or sandwich shop. The plans also includes the creation of a car park with 183 spaces and new access from Earl Road, together with landscaping and associated works.

Orbit's site currently contains two large warehouses and a smaller office building, built in the 1970s, and scrubland. It is bounded to the west by the John Lewis distribution centre and to the east is the vacant site which Consolidated Property Group have submitted plans for Phase Two and Three of a retail and leisure development comprising of retail units, cafes and restaurants, a gym and a hotel. Phase One of this development is now complete with the Next store having opened last year.

Much of the proposed site already has planning consent for an office development but Orbit says this has not come to fruition due to a lack of demand.

However, the Planning Officer is recommending this scheme for refusal because the loss of employment land is considered to significantly outweigh the benefits of the proposal.

A report prepared for the meeting on Wednesday, 22nd March, states:

"The justification for policy E2 of the local plan explains that retailing is not permitted (on existing employment sites) because it would reduce the amount of employment land available and provision is made elsewhere for retailing. It is acknowledged that the proposal would generate a significant number of jobs; however it is not considered that the merits of the proposal should be judged by the numbers of jobs it creates."

It continues "The proposal will result in the loss of employment land at a time when the Council is actively allocating additional employment land as part of its emerging local plan. The need for sites is such that even Green Belt locations are currently being identified for future employment purposes in the north of the Borough. The loss of the application site would exacerbate this situation and place further pressure to locate sites within the Green Belt."

This latest application is a resubmission of planning application 15/0400M which was refused by Cheshire East Council's Strategic Planning Board in February 2016 on the grounds that the loss of employment land is considered to significantly outweigh the benefits of the proposal.

Orbit Developments have also appealed against the refusal of the previous scheme (reference 15/0400M) for five retail units and two restaurants, cafes or takeaways along with 240 car parking spaces - claiming that the scheme is an acceptable form of land use in a sustainable location which will deliver significant benefit to the local economy and local employment prospects.

The planning application can be viewed on the Cheshire East Council website by searching for planning reference 16/5678M.

Harry Holcroft
Cheshire east council are a disgrace not letting this scheme go ahead,it might infringe on there beloved Macclesfied and surrounding areas instead of enhancing the borders of Stockport .
We need investment that this scheme will generate in all areas