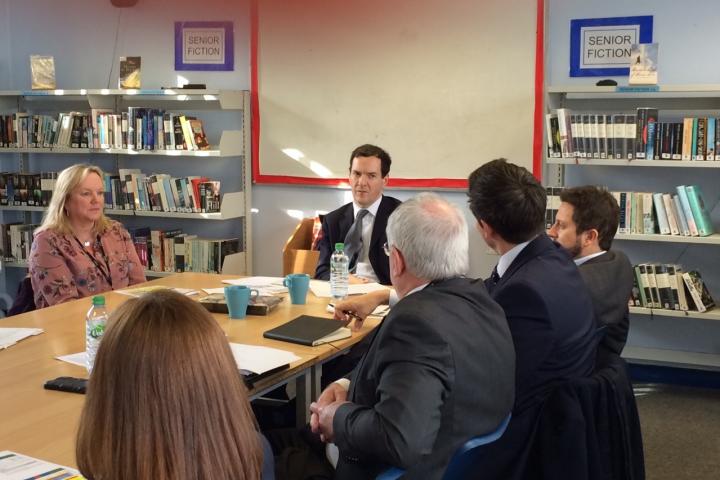 Tatton MP George Osborne called a meeting of Cheshire East heads and governors from within the Tatton constituency to discuss the proposed changes to the National Funding Formula for schools, which according to the National Union of Teachers would see our local schools lose over £1.8 million from their annual budget by 2019.

The discussions centred on the concerns about the government's proposal to introduce a National Funding Formula in 2018-19, which is designed to deliver a transparent funding system where the amount of funding children attract for their schools is based on need and is consistent across the country.

However, the new system would result in a cut in budget for every primary school in Wilmslow, Handforth, Styal, Alderley Edge, Nether Alderley, Chelford, Mobberley and Mottram St Andrew, as well as Wilmslow High School.

George Osborne said "Everyone wants to see a fairer and more transparent way of funding schools. It can't be right that almost identical schools, with pupils from similar backgrounds, get wildly different sums of money. The key challenge is to get the detail right. Having listened to and met with heads, governors and parents about the impact on the detailed formula in Cheshire, I appreciate their very real concerns. I am determined that the voice of Cheshire schools will be heard.

"I will work with the other local MPs to make sure the case for Cheshire is properly considered. We will then await the results of the consultation and once we know where we stand – we can plan our next step."

Dr James Pulle, Headteacher at Wilmslow High School, told wilmslow.co.uk "With Cheshire East MPs having been prominent nationally in raising concerns about the implications of the currently proposed version of the National Funding Formula for schools, it was good to explore the issues in detail with George Osborne when he visited Wilmslow High School on Friday 24th February. He listened carefully to the arguments expressed and discussed the matter fully with the headteachers, school governors and Cheshire East Council officers present.

"His promise of support for the Fair Funding campaign was welcomed and he gave knowledgeable advice about the importance of strong public engagement with the government consultation that is taking place."

To help facilitate this, Wilmslow High School will be running workshops for parents from all local schools and carers on the National Funding Formula at 5.30 pm on Tuesday 28th February and Monday 6th March. Parents planning to attend are asked to email [email protected] in order that arrangements can be made.