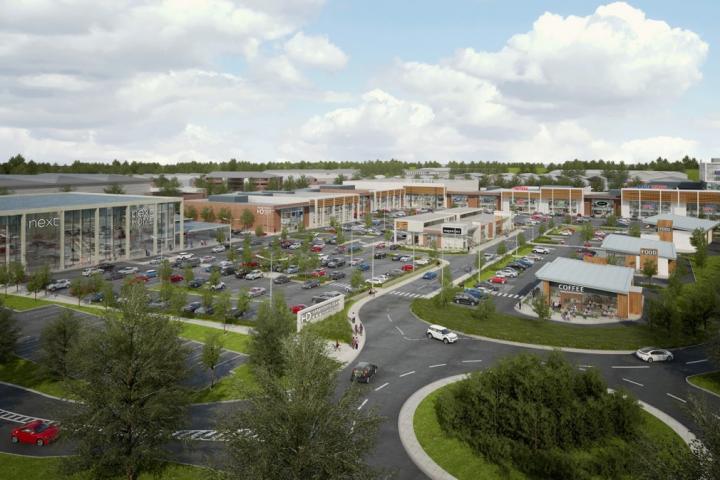 The owners of the Trafford Centre and joint owners of The Arndale Centre are objecting to plans for a new retail and leisure development on 15-acres of derelict land in Handforth.

Alderley Edge based developer Consolidated Property Group (CPG) has submitted the proposals to Cheshire East Council for Phase 2 and 3 of Handforth Dean Shopping Park which includes retail units, cafes and restaurants, a gym and a hotel.

Cheshire East Council has already approved plans for a Next store on the site, which began construction in December 2015 and is due to open in October 2016. The rest of the site would be developed over two phases.

The lengthy objection submitted by NJL Consulting on behalf of Intu Properties states "As a major investor in the Manchester City Region with assets which form an integral part of the retail hierarchy of the Region intu have significant concerns about the proposed development at Handforth Dean. Their concerns are such that we have no option but to object on their behalf and the reasons for the objection are outlined below."

The first issue they raise is the location, stating that the site is not within or even close to a designated retail centre and therefore does not benefit from good transport links. The impact on other retail centres, given the scale of the proposed development is also of concern - such as Manchester city centre, as is the proposed catchment area which they say does not take the SEMMS Link Road into account.

Intu also state that the scheme is directly contrary to the Council's own emerging Local Plan because "The Local Plan for Cheshire East Council does not propose a new retail centre or even retail development at the application site. Hence, it follows that the Council do not accept that there is any need for the proposed development in this location otherwise it would have been included within the emerging Local Plan." and in order to release it from its employment designation then CPG needs to have provided evidence that it is no longer required for employment purposes.

The letter concludes by stating "As the Council control the land it is even more concerning that they are allowing a proposition that runs directly counter to their own adopted and emerging Local Plan to come forward in the first instance."

Martin Ridgeway, group managing director at Consolidated Property Group, said: "Handforth Dean Shopping Park will provide high quality brands currently absent from the area and fills a gap in the market where residents currently have to travel many miles to shop.

"This scheme will provide retailers with the type of accommodation they require in order to showcase their full range of goods. The new Next store, opening in October 2016, is a good example of the high quality shopping experience we aim to create.

"This scheme will regenerate derelict brownfield land and create 1,200 new jobs. It will also reduce the very significant leakage of local retail spend outside of the area and so provide a significant boost to the local economy.

The retail element of the scheme forms the third phase of CPG's masterplan for the site and consists of 340,000 sq ft of retail and leisure space, along with a 66 bed hotel, arranged in an L shape around 424 parking spaces.

The site is situated between Earl Road and the A34, adjacent to Handforth Dean Retail Park, and has been vacant since 2010, having previously been occupied by a park and ride facility for Manchester Airport with 3000 spaces.

The planning application can be viewed on the Cheshire East Council website by searching for planning reference 16/0138M.

Adrian Scott
Take note Cheshire East. Both the Trafford and Arndale Centres are frightened of competition from far distant Handforth. If that's grounds for objection to planning perhaps there should only be one restaurant in Alderley edge ! What in heavens name is wrong with competition ? It's healthy and gives more choice (And easy access), to the people of Cheshire. I look forward to it's rapid completion. Well done CPG