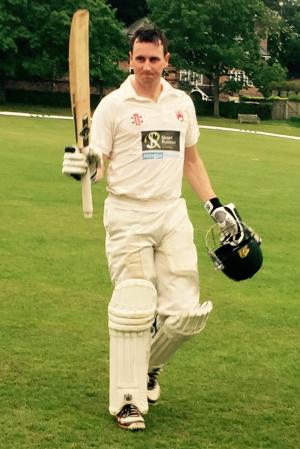 Alderley's strength all year has been the top order batting, and with top scorer Calum Rowe out of action through injury, Richard Wilkinson (65) opened with Alan Day (60) to put on an opening stand of 129.

Given that Bramhall had been restricted to 185-9 from their 55 overs thanks to another excellent collective effort from the bowling attack (Charlie Reid being the most successful with 3-38), this appeared to have made victory a formality. However, the jitters then set in big time! Six wickets went down for just 27 runs and it looked like Alderley's recent Bramhall hoodoo might return to bite them once again.

Fortunately Sam Perry and Tom Foreman steadied the ship with a key undefeated 7th wicket partnership of 31, and the 25 points were secure. Alderley still have most of the big guns to play – Hyde, Nantwich and Chester Boughton Hall all loom on the horizon in August... but they all have to catch Alderley!

The 2nd XI again produced a decent batting performance, making 195 at Bramhall with Adam Wildig top scorer with 76, but the absence of some of their front-line bowlers meant that this proved to be an inadequate score, and Bramhall's win by 7 wickets leaves Alderley again perilously close to the relegation places.