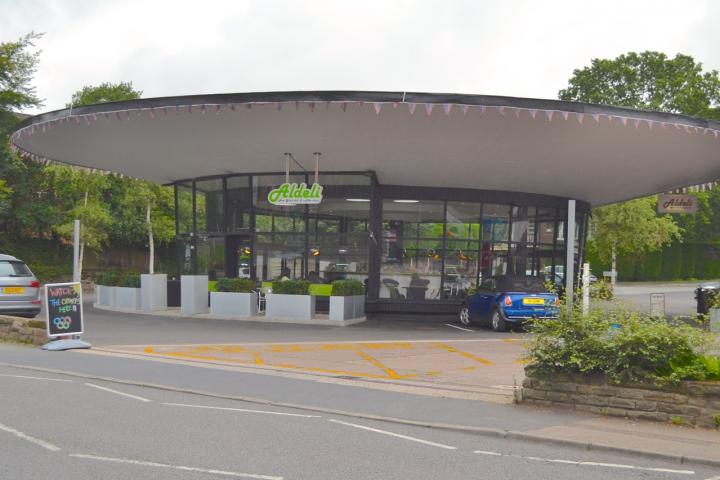 Following a break-in at an Alderley Edge diner this evening, the police helicopter was hovering over Alderley Edge for about 45 minutes.

Aldeli on Wilmslow Road was broken into at about 9.15pm.

Owner Stephen Higham was alerted by his alarm company and arrived at the premises to discover the police were already in attendance and they had just missed the intruder(s).

Stephen told me "We had a fantastic police response, they recovered a lot of our property which was spread around local area. The police sent the dogs out and a chopper but we think the thieves have hidden around railway line.

"They took a lot of keys, if anyone finds keys I would be most grateful for their return."

The offenders smashed a door to gain entry and made a lot of mess. They escaped taking cash, keys, laptops and a brief case.

Sgt Andy Miller said "The intruders had made off before police arrived but left what is thought to be their vehicle nearby. Cash and electrical items have been stolen but some property has been recovered.

"The police helicopter and a dog handler were requested to search for those involved but no one was found. If anyone was in the area of Highams Garage last night between 8.30pm and 9.30pm and saw anything suspicious please contact Cheshire Police on 101 and quote incident number 864 of 16/03/15."

John Moylan
Thanks for this report. I spent quite a bit of time watching the police helicopter hovering nearby and wondering if I'd ever know what was happening. I hope the police apprehend the perpetrators.

David Hadfield
If they find the culprits, chop their hands off !

Pete Taylor
I know that Henry Edward John Stanley, 3rd Baron Stanley of Alderley (11 July 1827 – 11 December 1903), was a convert to Islam and in 1869 Lord Stanley became the first Muslim member of the House of Lords but I had not realised that Sharia Law had been enacted in the area.

Alan Brough
I hesitate to ask the question as I am a great supporter of the Police, but is the use of a helicopter in this case "proportionate" with the severity of the crime?

We could see and hear the activity over the best part of an hour on Sunday evening, with searchlights flashing across the neighbourhood and the sound of the helicopter overhead.

We were convinced that, at the very least, a murder manhunt was underway.

Pete Taylor
@Alan Brough, I wondered the same thing. If that level of response were to be deployed in Greater Manchester, it would be like a scene from Apocalypse Now but bigger and they would repeat it day after day.
I suspect the the Police and Crime Commissioner does not have enough of "his" (our) troops on the ground.