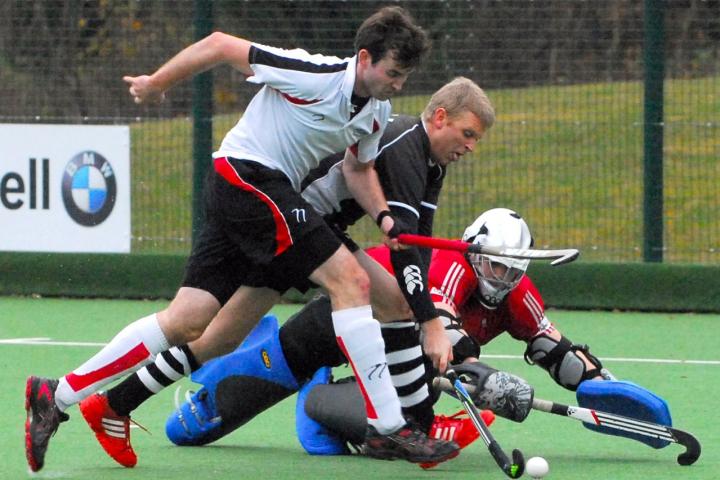 Alderley Edge Hockey Clubs Men's first team hosted Oxton in the North Premier Division. The first half was equal with neither side creating any clear cut chances, with Ben Whitehead outstanding at the back and Chris Cook disruptive in the midfield.

In the second half Alderley started brightly and put pressure on the Oxton backline, with Sanders going close. Oxton then forced Riley into a good stick save before Alderley opened up the Oxton defence for the first real time, Wildig seeing an effort go near and then another well saved. Warburton had a chance from a penalty corner but the routine went array.

It was Oxton who opened the scoring when Alderley turned the ball over just outside the 23 metre line, Oxton worked the opportunity well and the scuffed finish found the net. It was soon 2-0 when a long corner was played into the D and the forward held off would be tacklers to find the free man and he swept home from very close range.

Oxton then began to sit back and Alderley started to put on the pressure, McCormick reduced the deficit when he fired home a penalty corner. Oxton then began to time waste and break up play, happy to hit the ball off and aerial the ball down the pitch. Oxton had a man sin-binned for failing to retreat at a free hit. They then had a second player sent to the sidelines when Ben Gregory's skillful running resulted in him being repeatedly fouled. The last ten minutes were frantic and Oxton saw another two players sin binned. Alderley also saw Mattingly given a yellow card. Despite numerical advantage desperate defending by Oxton worked and they took all three points.

In North Division Two the second team won 3-1 away at Lytham St Annes with 10 men for 60 minutes after Laurence Barnes was sent off after reacting unfavourably to rough treatment and with only player coach Ben Hodkinson on the bench following two early injuries.

The lads played courageously in the second half going 3-0 up with goals from Chris Ashton with a diving deflection, then Sam Gregory beat 3 players before firing in from top of the D and a penalty stroke from Chris Hardy after the keeper smothered the ball rather than giving up a tap in goal.

Lytham got an undeserved consolation at the whistle.
Simon Pickering made some crucial saves and man for man it was an outstanding effort.
Man of the match was Andy Williams but all were outstanding in both commitment and effort

The 4s drew 2-2 against a more experienced and physically bigger Lymm 2s, twice coming from behind. Both Lymm goals were a result of a deflection off the defenders stick which left Dan Jones with no chance to react and he picked up the man of the match award. Skipper Williams scored from close range after a long ball from the right got through the defence. Thomas Jefferis deflected in a short corner with a minute to go after a defender was sacrificed for an extra attacker in the final few minutes.

The 5s played early league leaders Bowdon, Alderley were in good form with youngsters Elliot Webb, Ben Lynch and Oli Macfadyen having excellent games at the back. Alderley opened the scoring when Roland Alston scored with a flick from a penalty corner and soon after Harry Booton made it 2-0 with a driving shot from the top of the D. Bowdon pulled one back but Thompson and Savin then grabbed hold of the midfield and Stewart was a constant threat out wide. Alderley finished the game off when Allenby has heavily fouled in the D. Alston stepped up and converted the resultant penalty stroke. Final score 3-1.

The 6th team lost 9-1 to Bowdon, but the 7s made some amends beating their Bowdon counterparts 6-2.