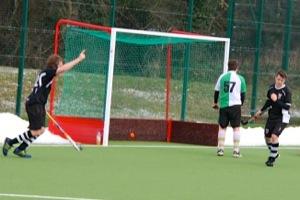 All of Alderley Edge Hockey men faced their Bowdon counterparts in the final game before the league programme begins.

The first team came up against a committed and energetic Bowdon squad and in the first half found themselves soaking up the pressure and trying to counter attack. And it was from such a breakaway that Alderley took the lead. James Warburton and Ben Gregory combined well and, although the initial effort was blocked, Oli Parker was on hand to follow up and convert the rebound.

Bowdon bounced back quickly and equalised when hesitant defending allowed the player through on goal. His lifted cross was cut out by Hall but Bowdon reacted quickest to force the ball in.

A ten minute spell of good play and intensity followed and along with some great finishing and good fortune, including a chest high shot going wide being deflected in by a defender, allowed Bowdon to open up a comfortable lead.

Alderley did not back down and when good skills by Simon Parr resulted in a crude challenge, a penalty corner was awarded. Angus McCormick fired home to reduce the deficit.

With several new faces and positions being tried, Alderley reshuffled and the second half was a much more even affair. Matt Cresey looked comfortable at the back and Mattingly found more time to improve his passing range, whilst still looking to attack quickly. Alderley had an equal share of possession and the chances that fell without being able to convert.

Bowdon did take advantage of another chance when again the initial block fell to a Bowdon stick allowing a simple finish. Bowdon finished strongly and Riley was forced into a couple of timely interventions. Final score 6-2.

With eight players returning this week, both the first team and second team will be much stronger for the league programme, the first team travel to Durham Uni.

The second team fared better achieving a 1-1 draw. Rob Marks getting the goal for Alderley with a close range finish.

The 3s went down 2-1, despite taking any early lead. With a draw perhaps the deserved result with reflection on the game.

The 4s with a combination of youth and experience had a straightforward 4-1 victory with 5 of last year's juniors playing. All 5 had excellent matches with Thomas Jefferies and Jake Rothwell both scoring and Alex Jones being named man of the match.