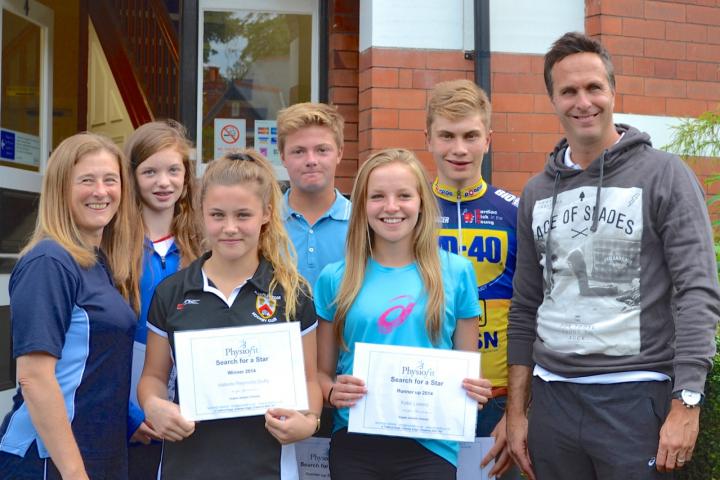 Physiofit has successful completed their 'Search for a Star' campaign.

The Alderley Edge based clinic, which has a reputation for developing young athletes with many going on to represent their country in their chosen sport, launched a competition in June offering one 12-17 year-old the opportunity to become their first sponsored athlete in their "Search for a star" campaign.

Director of Physiofit, Angie Jackson said "I was overwhelmed by just how many talented youngsters there are across Alderley Edge and Wilmslow and we had nearly 50 applicants."

Ex England cricket captain Michael Vaughan, who now lives in the village, helped select the winners and present their awards.

The winner is 15 year-old hockey player and sprinter Isabelle Reynolds Duffy who goes to Wilmslow High School. Issy, is a key member of the successful under 16 squad at Alderley Edge Hockey Club and will be hoping to be selected for the Ladies First team as one of the youngest players. Since she began playing hockey in year 8 Issy has reached the North u15 HIPAC level which is a massive achievement in such a short space of time. Issy, who is also a successful sprinter competed in the U16 National Schools Athletics finals finishing 4th in the 75m event.

Angie Jackson said "The deciding factor for Issy was her wonderful reference. Issy was recommended by her school hockey teacher who highlighted the dedication Issy shows at practices often staying late to put in extra time. Issy has had very little strength and conditioning input and given the speed of her rise to success in both her sports the judges felt that she would benefit most from the sessions with the Physiofit team."

Issy will be awarded free physio, strength and conditioning sessions, a running and biomechanical analysis and many other opportunities to help her reach her dream of playing hockey for England.

The selection process was made incredibly tough by the high calibre of athletes who applied.

Angie added "It is reassuring to know just how many talented and dedicated sporty children there are in our local area. In the light of the number and the quality of applicants, I have decided to make some additional smaller awards to children who are showing outstanding commitment and success in their chosen sports."

The Physiofit for Cyclists award was won by Alexander Braybrooke, 16, from Wilmslow High School who has shot from 13th to 3rd in the National rankings this summer and represents Velocity WD-40 team. He will receive a cycle specific muscle imbalance screening and strength and conditioning programme and have his bike set up to optimise performance and minimise injury.

The Physiofit for Golf award went to Joshua Turnock who attends Tytherington High School. Joshua is seeing his golf handicap fall and is on route to reaching his dream of a place at the Lee Westwood Golf School.

The Physiofit to Run award went to Katie Lowery. She goes to Holmes Chapel High School and is now one of the top 800/1500m runners in the country and a member of Macclesfield Harriers.