Hockey: A walk in the park for Alderley men 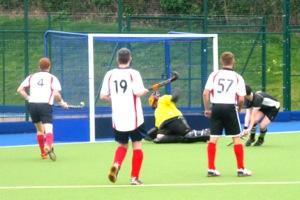 Alderley Edge cruised into the second round of the Cheshire Cup with a 5-1 victory over Winnington Park.

Play was initially disjointed with Winnington put in plenty of work to prevent Alderley from attacking fluently.

It was Winnington Park who took the lead against the run of play, when Hall's clearance appeared to come off the Winnington forwards stick and into his own leg, but play was allowed to continue and he ran on into the D and held off tacklers to shoot home.

Alderley Edge then had much the better of possession and territory and the Winnington keeper made several good saves. Mattingly then began to find space and linked well with Bryant in the middle to get Alderley on the front foot. Parr and Parker both creating problems for the visitors defence.

Alderley Edge equalised when a cross from the left was fired towards the front post and Ben Gregory got in front of the keeper to touch home and was heavily upended for his trouble. Robin Laughton on his competitive first team debut had a half chance and several crosses flew across the face of goal and shots narrowly missed the target.

The second half was much easier for Alderley Edge as Winnington began to tire. With McCormick keeping it solid for Alderley at the back and Gregory rampant up front they began to take full control. Good link up play between Joe Coxon and Warburton lead to Gregory deflecting home at the far post.

McCormick hit a post and Warburton was again foiled by the keeper before he did get on the score sheet, following a quick free hit he drifted into space and got the deftest of touches.

Winnington had a ten minute spell where they were very competitive and put pressure on the Alderley backline but Alderley's defence was much better organised in the second half and Winnington only had one shot in the whole of the half.

Alderley killed the game as a completion when Gregory completed his hat-trick when good interplay gave his space to beat his man and find a tidy finish. The scoring was completed when Harry Whitehead in only his second first team game deflected in a cross from the right that looped over the stranded keeper.

The final few minutes were seen out and Alderley now face National Premier side Brooklands in the next round.

The Second team had a fairly straight forward win over Didsbury Northern. A Goal either side of half time was the difference, the first from Laurence Barnes firing into the top corner after a well constructed fast break. And the second a rebound finish from recent recruit Dan Bayliss following up from a Chris Hardy corner strike.

Playing a new system the team is beginning to gel and in the second half the level of communication was excellent and Didsbury only managed four meaningful attacks. Todd Leddy and his fellow junior graduates are showing real promise and keeper Ted Heywood made some important stops early on.