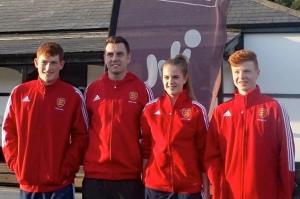 Alderley Edge Hockey Club has made it a hat-trick of England players from the men's section following first XI Captain James Riley's selection for the Masters squad.

He joins Andrew Jackson (Under 18s) and Callum Middleton (Under 16s) in being included in the England set up for the forthcoming international season. Representing the ladies section in gaining international recognition is Helena Evans who is training with the Under 16 squad and is hoping for selection for their matches in the summer.

James has been picked for the World Cup in Holland in June and the Home Nations tournament in Ireland in August. Andrew and Callum will be hoping to compete in their respective Four Nations tournaments in Germany later this month and Spain in July. As well as attending further training camps and playing in other matches over the summer.

Club President Ed Johnson commented "It is a great achievement and recognition of the dedication shown by James, Andrew, Callum and Helena and for a club like Alderley Edge. We are clearly a club on the rise both in terms of the teams and the individuals peformances. This success demonstrates how the coaching and infrastructure helps players of all ages achieve their goals. We are proud to have senior teams winning their leagues, and ages from U14 to masters playing in national finals."

Alderley Edge had a record breaking season with three of the men's teams and two of the ladies' teams being crowned champions. They have 13 league teams competing each Saturday along with a thriving junior section who picked up several local and regional titles and regularly have 200 youngsters training on a Sunday. New players are welcomed and further information is available at www.aecc.org.uk.